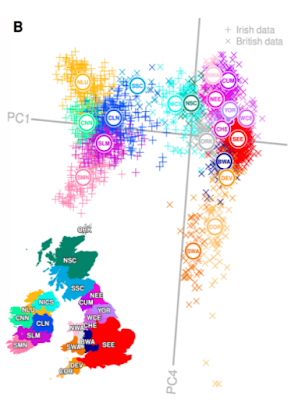 Ross Byrne et al. have just posted the pre-print of a new article on Irish genes, based on studies of the modern population. They find, first of all, that the Irish are clearly distinguishable, genetically, from the rest of Britain; the biggest division in their dataset is between the two islands. The Xes in the diagram above are representations of individual genomes arranged according to variation; the colors represent groupings in the data. You can see that the distance between the genomes, by variation, roughly maps out the British Isles. Note that while southern Britain is a long way from southern Ireland, northern Ireland and western Scotland overlap. 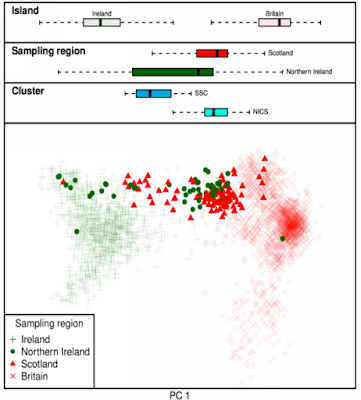 Close-up of northern Britain and Northern Ireland, with marks for two genetic types that were found in both region. This clearly shows mixing of these populations. It does not show, however, when the mixing took place. Some could be early medieval migration from Ireland to Scotland, some from the Scots migration to Ireland in the 16th century (the Ulster plantations), and some from the economic migration of Irish people to Scotland in the 18th and 19th centuries. In this study they used the genomes of people who lived in the same district as their grandparents, to exclude recent mobility, but that doesn't reach far enough back to catch people whose ancestors relocated in 1800 or 1848.

Cladogram showing how the various populations are related to each other. The authors think their data shows a strong "east-west cline," that is, the farther you get from London, the more different people's genes are from those of the bright red Anglo-Saxon heartland.

Note that Orkney is a serious outlier, quite different from England, Scotland, or Ireland. And this is not just because of the Vikings; even excluding their genes, Orkney still stands out. 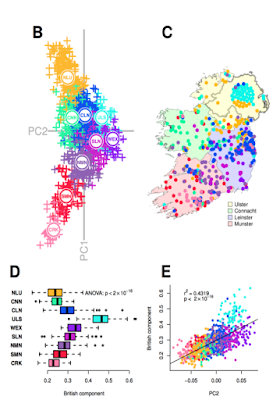 The authors also found a lot of variation within Ireland. They knew that some of the difference between Dublin and Ulster and the rest of the island would be because of British immigration in recent centuries, so they worked to exclude that contribution from their calculations. The result is a map of variation that, once again, roughly maps out the island. Even more remarkable, it seems to map out the ancient division of Ireland into five kingdoms known as "fifths." So if you exclude Vikings, Ulstermen from Scotland and English who settled Dublin and Waterford, it looks like many families of rural Ireland have been in the same districts for 1,500 years.
Posted by John at 8:34 AM