Jo Walton, Among Others 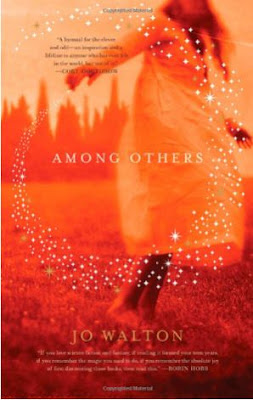 I just finished re-reading Jo Walton's Among Others (2010). I was about halfway through and caught up in the story when it occurred to me that this is the only the second time I have re-read a fantasy novel in twenty years, and a lot closer together than my two readings of Game of Thrones. This is a book that grabbed my imagination and carried it away.

It's about a girl, Morwenna Phelps, who is 15 years old in the Britain of 1980. There are two things about her: she is a smart kid in love with science fiction and fantasy; indifferent to the concerns of her classmates, she ignores sports and music but reads ten or more books a week. And, she talks to fairies and learns from them how to stop her mother, a mad witch, from becoming the Dark Queen of some big part of the earth.

It is the more prosaic parts of the story that grabbed me. Mor (as she calls herself) reads like I did at times when I was 15, going through stacks of sf and fantasy that I got from the library or the 25-cent bin at One Horse Books in Rolla. Her voice as she pours scorn on the other 15-year-olds rang true to me. She is perhaps a bit too calm and self-possessed for a real teenager, but I loved the way she looked at life. A creature of books, she sees the world through a reader's eyes, using words and categories from her favorite stories. When stressed she recited the "litany against fear" from Dune, something I once did myself. She and her sister name the old industrial ruins around her home in Wales after places in Tolkien: Osgiliath, Ithilien. She finds her first real joy in the story when she joins the sf book club at her local library; finally, people she can talk to about what she really loves and cares about! The first time I read the book I had a little trouble with these parts, because she mentions dozens of sf novels from the 60s and 70s and I kept trying to remember which ones I read and whether I had liked them, and it bothered me that except for a few favorites I had largely forgotten. This time I let it go and liked it better.

Most of the magic is the sort that could be taken for something else, maybe luck or fate, and the fairies slide between being real and serving as a sort of synecdoche for imagination. It is possible to read the story and think of it all as metaphor: for creativity, for a determination not to be like everyone else, for the way Mor expresses her growing understanding of the world, for the way she breaks away and finds her own path. But it is also possible to read the fairies as real and the magic as darkly powerful. In the wonderful ending, the two interpretations come together perfectly.