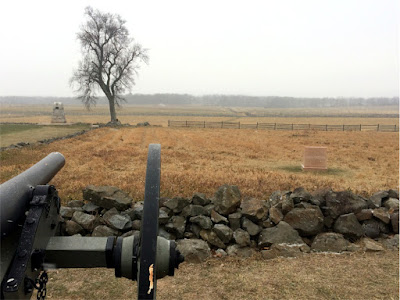 Union artilleryman's view of the route of Pickett's Charge, which started from the distant tree line. Stone monument just over the wall marks the farthest point that the men of Pettigrew's North Carolina brigade reached before these guns blasted them out of existence. Since all the officers of the 1st Rhode Island artillery were by then dead or wounded it was a sergeant who told the gunners to hold their last rounds until the Rebels were only 20 yards away. "The gaps blown in their line," one gunner wrote, "were terrible to behold." The Confederates advanced not a step farther, not here or anywhere else, not then or ever.

If you wondered why I haven't been posting much lately, well, my Gettysburg thing is just one of the twenty-odd projects I'm juggling, scattered from South Carolina to Maine.
Posted by John at 7:33 PM

I hadn't realized the charge was across such a distance. This photo makes it seem like an utterly insane tactical choice against any significant amount of artillery - particularly against grapeshot.

You could perhaps make it work with a surprise charge of cavalry - but massed infantry? It seems utterly suicidal.

My seminary was in Emmitsburg, MD, just 12 or so miles from the Gettysburg Battlefield. As a result, some of us spent an inordinate amount of time wandering, finding off-the-beaten track monuments in the woods, reading, and thinking. (We also very much appreciated the fact that the library at the Lutheran Seminary in Gettysburg was far superior to our own, but I digress.)

Yes, G, I stood on both sides of the field across which Pickett's charge advanced and wonder, as you, about how nonsensical it was, at least to our modern ways of thinking about "attacking" the enemy. I am tempted to say I am grateful that tactics have changed, but that might not be the way to think about it.

As Shelby Foote put it in the Burns series, "Not only was it a mistake, there was scarcely a trained officer on the battlefield who didn't know it was a mistake." Longstreet later wrote that he tried desperately to talk Lee out of it, but failed; he commented to a British observer that the attack was defeated before it even began, but it had to continue "until honor is served." Lee, realizing it had been a terrible mistake, offered his resignation, but Davis rejected it.

As to why Lee did it, well, you have to remember that he knew the Confederacy was losing the war, so he felt that he had to try something, even something desperate. He also by that point had great confidence in his own men and a bit of contempt for the Federals. Longstreet said that after two days of mostly successful fighting Lee's "blood was up," and when he was like that he was determined to keep fighting if there was any chance of success.

You have to admit that after the first two days it would have been a real anticlimax to just turn around and go home without trying something more, and again, since Lee knew the South was losing the war, he knew an anticlimax would not help the cause.