The Emperor's Quest for Immortality 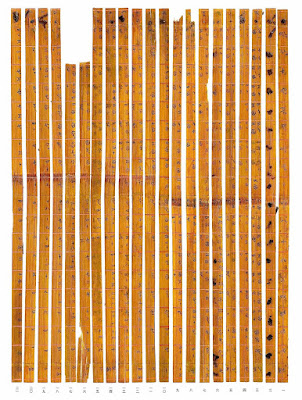 Back in 2002, more than 36,000 wooden slips with more than 200,000 Chinese characters written on them were discovered in an abandoned well in a village in western Hunan. They date to the Qin dynasty, 222 to 210 BC. Studying them has taken a long time, but bits of news are now trickling out. One set of the slips


contain the emperor's executive order for a nationwide search for the elixir of life and official replies from local governments.

Zhang Chunlong, a researcher at the provincial institute of archaeology, said the emperor's decree reached frontier regions and remote villages.

According to the calligraphic script on the narrow wooden slips, a village called "Duxiang" reported that no miraculous potion had been found yet and implied that the search would continue. Another place, "Langya," in today's eastern Shandong Province near the sea, presented a herb collected from an auspicious local mountain.

I love this; it confirms the impression of Qin Shihuang Ti as a half mad tyrant, desperate to live forever even if thousands of peasants had to die building his mausoleum.
Posted by John at 2:09 PM