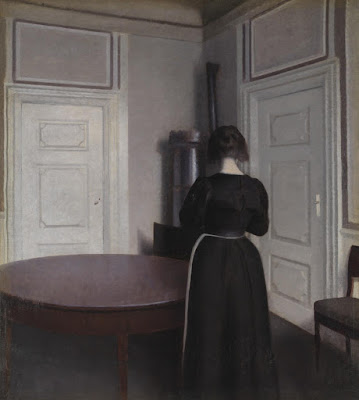 Vilhelm Hammershoi (1864-1916) is one of Denmark's most celebrated artists. Which might say something interesting about Denmark, given that most of his pictures show quiet white rooms with paneled doors and a bit of furniture; sometimes there is also a woman, almost always wearing black, almost always shown from the back. 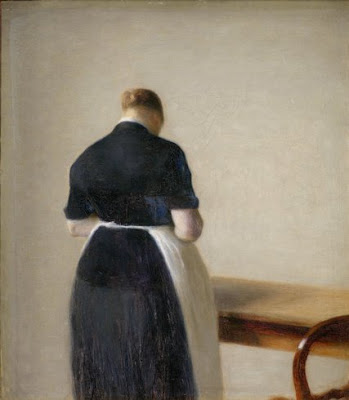 Like this one, Woman Seen from the Back. Some critics love these because of the intensity of the unseen. NY Times art critic Ken Johnson:


What marks Hammershoi’s paintings as modern isn’t style as much as a searching, melancholic mood. . . . Something is hidden, and it’s not just whatever it is that she is doing. Hammershoi’s rooms are spaces of spiritual inquiry animated by transcendental vibes that are felt but not seen. 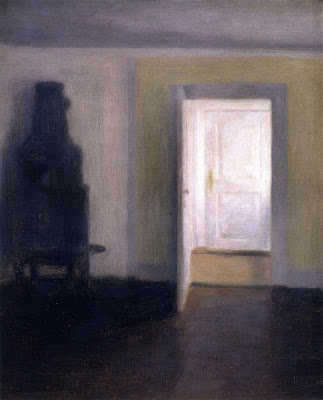 And the doors: if they are closed, what is behind them? If they are open, what might be coming through them? Johnson again:


Interior: An Old Stove (1888), an early example, represents a dim room vacant but for a hulking black furnace to the left. Through an open door to the right is a closed white door on the other side of a more brightly lighted hallway. What lies beyond that further door? Probably just another room, but there’s a poetic suggestiveness about it. If the painter could have opened that door, maybe he would have discovered another, more colorful, world.

Then again, probably not, given the utter absence of color in his whole oeuvre. 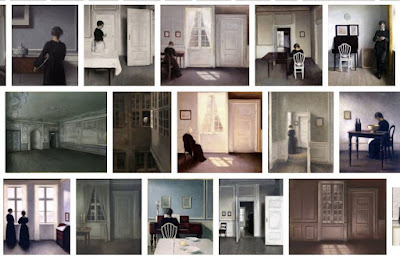 To give you an idea, here is a screen shot from the first page of images you get from Google. 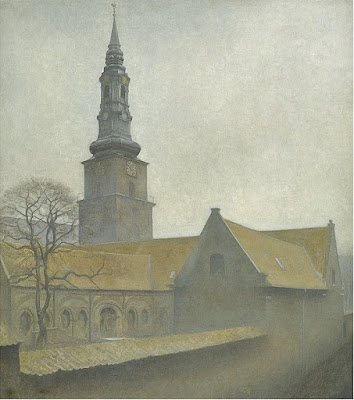 But Hammershoi didn't only paint interiors! No, he also painted exterior scenes, with the same lifeless, color-draining eye: St. Peter's Church, Copenhagen. I like this a lot, and it was this image that got me researching Hammershoi. 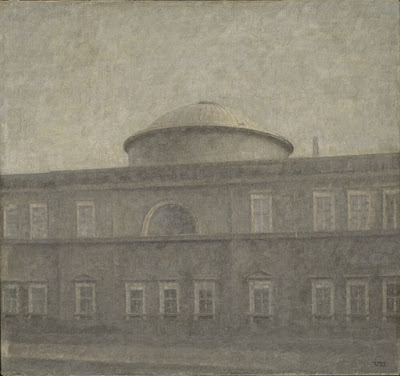 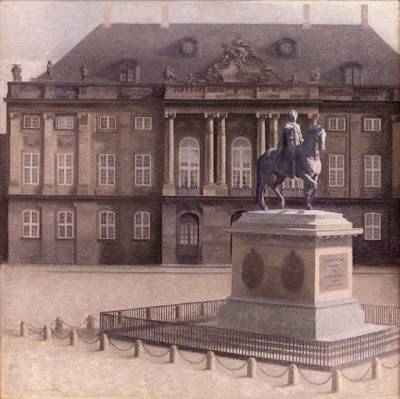 But how much of this can one take? 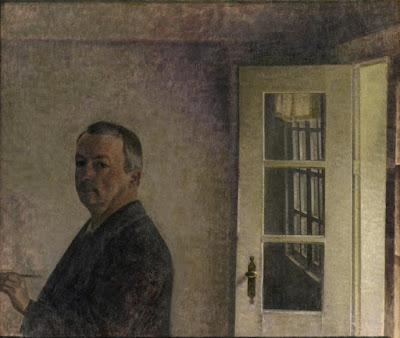 His portraits are done with the same palate; this is a self-portrait of 1911. 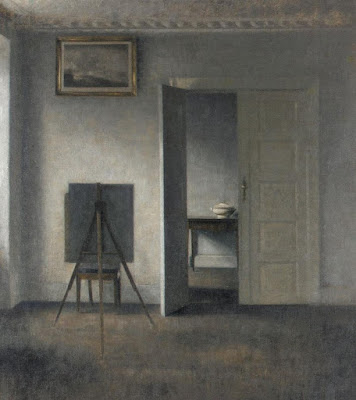 
To me, one of the exciting things about Hammershøi’s art is the way in which he takes a motif that seems to depict nothing at all and then turns it around so that you find that it contains everything. That a point of no interest becomes a place laden with great significance.

For example, take a painting of a wall in a light-filled room where there are only very few objects ... this might seem dull and boring at first, but if you pay close attention or dedicate some time to standing in front of the painting you can feel it resonating with your body.

Hammershøi’s very painstaking mode of painting and the time and effort he poured into the canvas is almost transferred to the spectator. Many brushstrokes are visible, and each of them holds a small world of understated colour and light or shade. Once you start noticing this, the painting opens itself up to you.

Well, ok, if that's your thing. 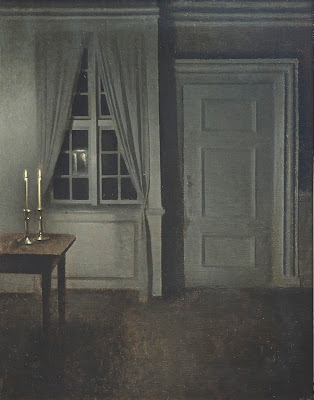 I'm not a huge fan of still lifes, so I like Hammershoi better. Taken one at a time, his pictures really intrigue me. But after a while both Hammershoi and Morandi inspire in me a longing for something bright and colorful. I thought about ending this post with a picture of Dolly Parton in the outrageous bright orange dress she wore in Best Little Whorehouse in Texas.