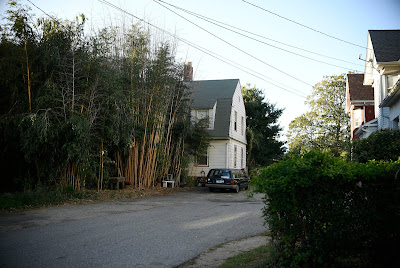 
The jungle rises at the end of the block, past a few narrow clapboard houses, where an old station wagon is parked on the road. What neighbors said was once a small patch of bamboo has swelled over the years into a thicket, reaching above the utility lines, pushing to the edge of the property and nearly swallowing a white house on Borodell Place, with only a sliver left poking out. . . .

The City of New London has declared the overgrowth of bamboo a blight. But officials said the resident, Carlos Carrion, has failed to pay fines and has ignored orders to cut back the plant. Now, he has become one of the first to be criminally charged under the city’s expanded blight ordinance.

Certain types of bamboo have been declared an invasive menace in some states and cities, because they spread so aggressively, but apparently not this kind:


“The bamboo I grow is not invasive,” Mr. Carrion said at a hearing this year, according to The Day, New London’s newspaper, which has covered the case closely. “I maintain the plants. It stays within the perimeter of my property and yet it’s considered to be a blight?”

The city says it is responding to complaints from neighbors, but the Times found some neighbors supportive.

Seems to me like another case of excessive busy-body-ness, born from our inability to stop telling each other what to do. Some people have a vision of what they want their neighborhoods to look like and they can't stand it when their neighbors have other visions.
Posted by John at 7:51 AM

To be fair, the article makes clear that Carlos Carrion is just such a busybody, who regards his bamboo as a blow against the American custom of "perfect square lawns." He has also campaigned in support of the similarly-minded elsewhere in New London. Whatever one thinks of his botanical preferences and other people's hostility to them, he's not just a quiet guy minding his own business.

Is this the same New London that used urban blight laws/eminent domain to bulldoze an entire neighborhood to sell it to Pfizer for a corporate project that never materialized?

Yes, yes it is. https://en.wikipedia.org/wiki/Kelo_v._City_of_New_London

So holding an opinion and trying to promote it is "being a busybody" in your book?

He wants to be able to have the lawn he prefers on his own property - nowhere does he appear to be trying to prevent other people from having the lawns they want.

It sounds like he'd prefer if other people stopped choosing to keep stereotypical manicured lawns, and he cites environmentalism as a large part of his justification, which is sound. Maybe that sounds insufferable or disagreeable to you - I don't know. But he's not forcing anyone to conform to his ideas of what is right.

Yet the neighbors are. They are using the tyranny of the masses to try to stop other people from doing what they want on their own property. They are exploiting their majority control of the local laws and government to enforce conformity on an issue of taste and custom.

My point was that Carrion is no innocent. He's clearly a player--one who was able, incidentally, to get one of the world's most powerful news organizations into his corner.

At this point, it is not at all clear that he is actually the weaker party. My bet would be that it's the neighbors who will have to suck it up and deal with a permanent display of disapproval toward their decorative preferences. So who's the tyrant? In a contest of power against power, score one for Carrion.