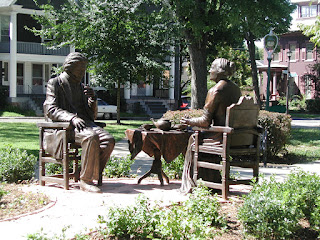 Here's something I would love to be part of:

The Andrew W. Mellon Foundation, the largest humanities philanthropy in the United States, has pledged to spend $250 million over five years to help reimagine the country’s approach to monuments and memorials, in an effort to better reflect the nation’s diversity and highlight buried or marginalized stories.

The Monuments Project, the largest initiative in the foundation’s 50-year history, will support the creation of new monuments, as well as the relocation or rethinking of existing ones. . . .

“The beauty of monuments as a rubric is, it’s really a way of asking, ‘How do we say who we are? How do we teach our history in public places?’” Elizabeth Alexander, the foundation’s president, said.

I know some of you think that I just want to defend monuments to Franklin and Washington, but really I spend a lot of time thinking about monumental spaces and what they mean, and about what kinds of monuments would both pass muster with our divided political factions and add something to our communities.

The Mellon Foundation's previous major foray into this area was putting up $5 million for a monument to victims of lynching. Which I think is great, and the monument looks impressive, but it's not the sort of thing that will enliven a public square. So I think a new wave of monuments can't be just about honoring victims. We need to find things we can celebrate together, and that are appropriate to the spaces where we put them. Oddly the first thing that came to my mind when I started to write that sentence was the monument to peer review outside a scientific institute in Moscow. It seems to me that we probably have to get away from monuments to particular people, which are bound to be controversial later if they aren't already, and set up monuments to groups, movements, and ideas. I would also want to get away from politics and war and look to other areas, because I think we used to pay too much attention to war and now pay far too much attention to politics.

I would love to hear people's thoughts. A few that have come to me:

I think there are some good lessons to be learned from the better Soviet monuments.

Yeah, there are the usual junky monuments to Lenin and Stalin and whatever, and some ugly overly-abstract blobs of concrete and hunks of steel. But many of them do exactly as you suggest, and honor groups, movements, and ideas rather than just individuals, often with very striking imagery.

The "Monument to the Conquerors of Space" is a stunning example, if a bit on the massive size (although not undeservedly).

The "Monument to Liquidators of the Chernobyl Disaster" is small, but powerful.

"The Motherland Calls" is a unfortunately nationalistic, but visually awe inspiring - particularly viewed as part of the larger environment.

The "Tomb of The Unknown Soldier" in Moscow is rather elegant and affecting.

---
And, of course, many of the questions we're grappling with in America are being grappled with in other parts of the world as well. The post-soviet states are themselves seeing a surge in questioning public monuments - particularly ones to figures like Stalin and Lenin, but many others as well.