Camilla Townsend, "Fifth Sun: a New History of the Aztecs" 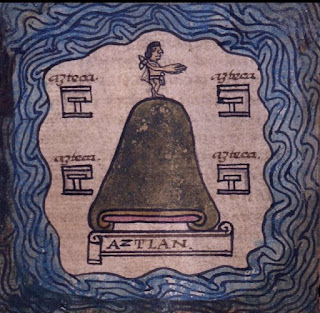 Camilla Townsend's Fifth Sun (2019) is an interesting attempt to write a history of the Aztecs from the native point of view. Townsend is the perfect historian for this task, because while she is committed to reversing Eurocentric bias, exploring indigenous perspectives, and all that, she is also eminently sensible. Like this:

There is a comparable issue regarding all the people who lived in North and South America long before anybody else. Over time, different words have been used to talk about them, some pejorative, some not. Today, people of descendant communities in various regions often have different preferences as to what they should be called. In Canada, they tend to prefer First Nations, and in Mexico, Indigenous. In the United States, some choose Native Americans and others American Indians or just Indians. Each group has valid historical reasons for its preferences. I do not choose between them, but instead use all these terms interchangeably. (xii)

Of course when they met Europeans the people of the Americas had no such word, using different terms for each community they knew of. During the years of Spanish invasion and conquest, those who spoke Nahuatl came up with one, which essentially means "us people here." Europeans and Africans were "those people there." 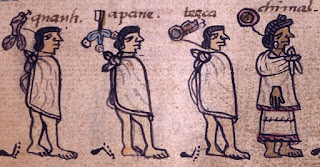 There are actually a great many sources we can use to reconstruct how the native peoples of central Mexico experienced the years from about 1300 to 1600 CE. Mexican people began studying the Latin alphabet within a year or two of Monteczuma's death in 1520, and before the end of the 1520s some of them were writing about their history and culture. The most important documents for our purposes are the ones Europeans call Annals. This seems to have been an ancient form. For each year there would be a glyph naming the year in the Nahuatl calendar, and beside it one or more illustrations of the year's key events. These illustrations helped professional remembrancers recall the extensive stories and genealogies they had learned, and helped keep these stories anchored in time. Once they had learned letters, dozens of different chroniclers began annotating such Annals with text describing the events represented by the images. 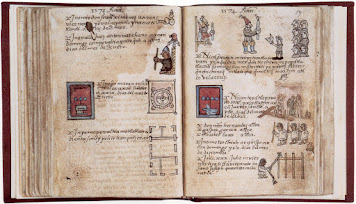 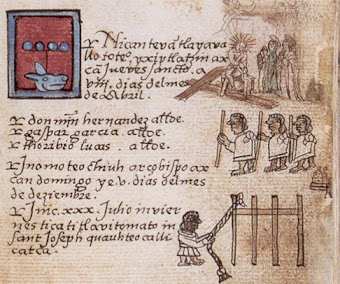 All of the images in this post come from one of those hybrid Annals, the Codex Aubin, which you can view in its entirely here. There are, as I said, dozens of such surviving documents, most of them fragmentary but some fairly complete, dating from between the 1520s and the 1680s. The identities of many authors are known, and while all are elite, they come from many different communities and therefore show different perspectives on the events they describe. Besides the chroniclers who mainly looked backward, there were some who recorded detailed impressions of events in their own times. Townsend devotes what seems like a great deal of attention to the events of 1563-64, when the Spanish fell out among themselves and accused each other of treason, partly over the issue of whether to impose taxes on the people of Mexico City who had thus far avoided them. These events had a marvelous native chronicler whose narrative can be set beside the official Spanish letters and court records, giving us a deep, multifaceted view. 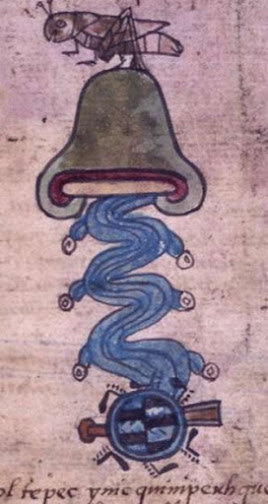 Townsend hints that the Annals are difficult to interpret, and that scholars disagree about what they say and how differences between them should be resolved. There are also questions about how we should see their authors' points of view. By definition all of them had received some European education, and some of them were writing explicitly to justify the actions of the Aztec leadership to audiences of Europeans or of natives who had no memory of pre-conquest times. They may have obscured or glossed over topics that did not fit their aims. For example, a few sources hint that the Aztec nobility were as enthusiastically bisexual as the elite of classical Greece, but those hints are few; is that because the authors covered up this part of their past, to conceal it from the Friars, or from their Christian grandchildren? Or was there never that much to cover up? 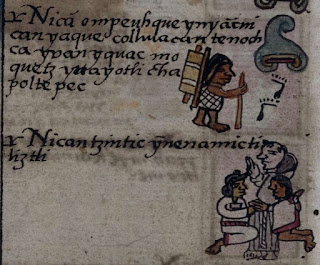 For the most part Townsend ignores these complications and just gives us the narrative as she reconstructs it, with only occasional asides on places where the sources are hopelessly obscure. After all, these are the closest thing we have to a native perspective, and there is not much use now in lamenting that they are not all we might want. The result is a clear account of events in central Mexico from 1299 to the late 1500s. After 1519 Townsend does rely to some extent on Spanish sources, mainly to reconstruct their own intentions, and also for military matters, since the describing of battles does not seem to have been part of the Nahuatl tradition. Townsend is also very interested in the experience of native women, some of whom played major roles in these events; she is also the author of a biography of the woman the Annalists called Malintzin, who was Cortez's interpreter, and whose life can be explored through both Spanish and Nahuatl accounts. 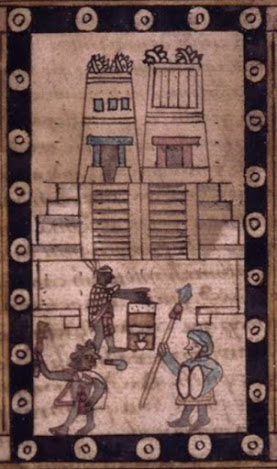 Let me just pass on one thing I learned from Fifth Sun: When the Aztecs wrote about political strife in their own past, they described all of the conflicts as following the same pattern. Noble Aztec men had many wives of various ranks. The senior wives of rulers would all be from noble families in allied communities. Some of these men had dozens of wives and a hundred sons, and by Aztec law any of them as well as many of their cousins might inherit. Of course the heir was usually the son of one of the most senior wives. So the men competing for the throne would all have a mother from a nearby community, and they would see the nobility of that community as their natural allies. Conflicts often broken out between rival half-brothers, each backed by the leadership of the allied community where his mother was born, and sometimes these led to civil wars. Looking back over their history, Aztec historians turned all of their wars into inheritance struggles of this type.

I found the book quite interesting and it is short, only 200 pages, so if you are curious about these matters I recommend it. And if you want to explore the sources and the issues with them, Townsend has proved a 30-page afterward on those questions. Fifth Sun is not all I would have wanted, because the Nahuatl sources are thinnest on some of the matters I would most like to read about, especially native religion. But, again, these are the sources we have, and if you want to read about Aztec religion as it was gleefully described by Spanish priests, there of plenty of books that will tell you about the piles of corpses and the Flower Wars. If, instead, you want to start seeing the main events of history from novel perspectives, this book is a great place to start. 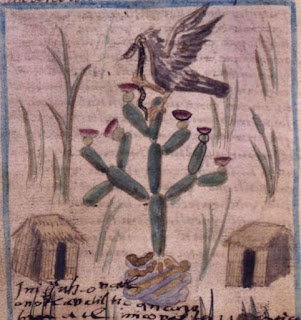 For example, a few sources hint that the Aztec nobility were as enthusiastically bisexual as the elite of classical Greece, but those hints are few; is that because the authors covered up this part of their past, to conceal it from the Friars, or from their Christian grandchildren? Or was there never that much to cover up?

I would argue that even minor "hints" toward bisexually in pre-Columbian culture need to be given a good deal of weight, to counterbalance the fact the very severe condemnation of such "deviancy" among Catholics of that era would have exerted extreme pressure on people to cover it up.

Remember that the Spanish Inquisition began in 1483, and "sodomites" were tortured, mutilated, and executed for at least the next two centuries. Even merely chronicling such acts as past events might garner a punishable accusation of promoting deviancy and immoral acts, and the church would certainly want to suppress any such texts.

Bah, screwed up my formatting, for clarity that first paragraph is a quotation.