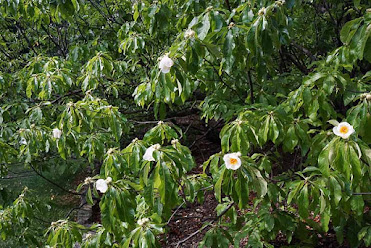 From a NY Times feature on plants that have gone extinct since Europeans reached North America:

Despite the fact that it’s considered extinct, you could reasonably venture upon Franklinia alatamaha.

Considered “extinct in the wild,” the Franklinia tree — along with six other plants listed in the recent study — now exists only in cultivated spaces such as arboretums or botanical gardens.

John Bartram, King George III’s botanist in the Americas, and his son William first described the species (and named it for family friend Benjamin Franklin) after stumbling upon the unfamiliar tree along Georgia’s Altamaha River in 1765.

In a lucky twist, the younger Mr. Bartram returned a few years later to collect seeds and cuttings, and brought them to Philadelphia where the first cultivated Franklinia tree bloomed in 1781. Within a quarter-century, in 1803, the species was spotted in the wild for the last time.

Today, any Franklinia trees you might encounter in cemeteries, gardens and parks are descendants of Mr. Bartram’s cultivations. “It wasn’t meant to prevent extinction,” Mr. Knapp said, “but it did.”

It’s unclear how the tree disappeared, though some have suggested a soil-borne cotton pathogen, over-collection by nurseries or a change in regional fire frequency could have played a role in its demise.

“What we have is conjecture. We really have no idea why it’s gone,” Mr. Knapp said. “But you can buy it if you go to the right place.” 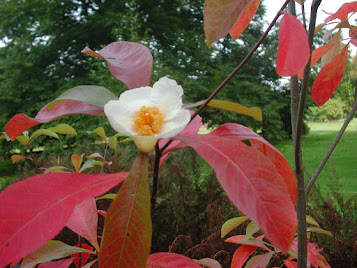 I think what did in most of the lost plant species was the very rapid changes that have overtaken the ecosystems of eastern North American. After around AD 1000 Native Americans began to clear large areas for farming and carry out selective burning on a large scale. As their populations rose their hunting had major impacts on animal life, including deer, another big change in the environment faced by plants. Then the Europeans arrived. The immediate result of this was an apocalypse of disease and death for Native humans, causing their populations to fall by 80 or 90 percent. Forests rebounded, and deer with them. Then the Europeans began to multiply and march across the country, clearing the forests and hunting out the animals. They also plowed the soil, leading to massive erosion, the silting up of rivers and harbors, and so on. Then they began to abandon fields, which reverted to forest; this was happening in New England by 1800. Then modernity with its roads, cities, strip mines, suburbs.

But in this case I think Franklinia was very rare to begin with. Europeans were on the lookout for useful plants from the moment they sighted the New World, so if this tree was growing that close to the coast without being described until 1765, there must not have been very many of them.

On a related note, don't know if it has been mentioned here, but there are a couple of mobile apps that identify trees, bushes, flowers, etc. I've been playing with Leafsnap a bit, and so far the results have been good. Take a picture of the plant using the app and then click on leaf, flower, etc. and the app tells you what it is.

Google "Lens" has been helpful, too.

I'll check that out, thanks.