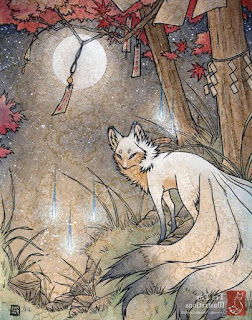 Operation Fantasia was the brainchild of OSS psychological warfare strategist Ed Salinger, an eccentric businessman who had run an import/export business in Tokyo before the war. Salinger’s business dealings had given him a cursory introduction to Japanese culture; he learned the language, collected the art and studied the superstitions—which is why the OSS hired him. Operation Fantasia, he pitched the organization in 1943, would destroy Japanese morale by exposing soldiers and civilians to a Shinto portent of doom: kitsune, fox-shaped spirits with magical abilities. “The foundation for the proposal,” Salinger wrote in a memo outlining his idea, “rests upon the fact that the modern Japanese is subject to superstitions, beliefs in evil spirits and unnatural manifestations which can be provoked and stimulated.”

After toying with numerous crazy schemes like balloons and projections, the OSS decided that they would catch live foxes, spray-paint them with glowing paint, and release them on the Japanese coast.

Of course at that time glowing paint was made with radium, so maybe the foxes would have been dangerous after all. But the story keeps getting weirder:

To find out whether the faux-supernatural foxes would actually frighten the Japanese, the OSS decided to release 30 glowing foxes in Washington, D.C.’s Rock Creek Park to gauge the reactions of the locals. If the foxes spooked Americans, the logic went, certainly they would scare the Japanese even more.

On a summer night in 1945, OSS personnel released the foxes in the park, and the creatures scampered along the trails with promising results. The sight of the ghostly apparitions at first confused and then terrified passersby on their evening strolls. One citizen was so concerned that he notified the National Park Police, which reported on the incident, “Horrified citizens, shocked by the sudden sight of the leaping ghost-like animals, fled from the dark recesses of the park with the ‘screaming jeemies.’”

That's a new one to me, and I am the co-author of a thick history of Rock Creek Park. And more:

In one newly discovered memo, Salinger wrote that he had learned of “a peculiarly potent manifestation of the Fox legend,” a version of the superstition that supposedly terrified the Japanese even more, that “appears in the form of a fox bearing death’s head on his crown.” His plan to capitalize on this information bears repeating in his own words: “We have made a stuffed fox with a human skull affixed to his head, equipped with a simple mechanical device for raising and lowering the jaw so as to simulate the opening and closing of the mouth of the skull. This stuffed figure will be painted to give the same luminous effect as in the case of the live foxes.” Salinger suggested draping the taxidermied fox body in a black cloth painted with glowing bones and lifting this human-fox hybrid into the air with balloons or a kite, as if it were levitating, to have an even greater demoralizing effect on the Japanese.

This went on and on, with one test and plan after another, until Stanley Lovell, head of the OSS Research Bureau, finally pointed out that the whole thing was absurd. Lovell once advocated making Hitler's moustache fall out by putting estrogen in his food, so I guess when he said it was too far-fetched the higher ups accepted his verdict. He said, “I trust that this will serve as a critique to us in the field of pure reason.”

Lovell once advocated making Hitler's moustache fall out by putting estrogen in his food.

If they had access to his food, wouldn't they just poison him? I suppose he must have had food testers to foil such attempts.

Indeed he did. Apparently fifteen young women were chosen for the job - I wonder if that's part of why Lovell suggested estrogen? Only Hitler would be affected.

That said, wouldn't it make more sense to just use a slow acting poison? Something that wouldn't show effects until after the food was tested and deemed "safe"? I can't imagine they waited all that long to see what happened to the food tasters - surely they wouldn't want to send Hitler a meal that had gone cold? There must be all sorts of poisons that only have an effect some eight or twelve hours later.

I wonder how much they knew, then, about radiation poisoning - might they have laced his food with a dusting of radioactive particles? Once the particles themselves get into the body, they linger and continue to emit radiation constantly.

Perhaps a very fine powder of uranium or radium or something similar. Goodness knows radium paint killed plenty of watchmakers in the 1920s, although it reportedly had an unpleasant taste. I would think, though, that OSS would be able to devise something with either no obvious taste or smell, or a way to cover it up in food.

Regardless, all of that hinges on having access to Hitler's food - seems unlikely.

Import/Export guy? Really? You mean like in every spy novel?

Art imitates life. They liked to make spies out of people with plausible deniability.

Someone running an import/export company would be in contact with people all around the globe, speaking all sorts of languages, receiving phone calls at strange times of day, procuring unusual objects for their buyers, et cetera. It's a natural cover.

Or it was, then. I imagine things work differently these days, both in the business having changed, and in terms of the common tropes having made people suspicious.