A Pagan Temple from 8th-century Norway 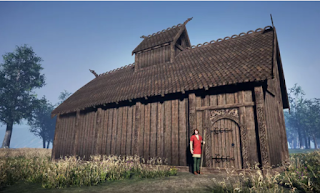 Archaeologists excavating a site near the town of Ørsta in western Norway have uncovered the remains of a 1,200-year-old pagan temple. These structures are not very common in the archaeological record because the Norse did not acquire the temple-building habit until around 300 or 400 AD and continued to do a lot of their worship outside, or in their houses. Then, after not building many temples, they converted to Christianity in the 10th and 11th centuries. 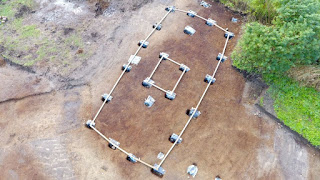 The temples that archaeologists have been able to recognize had a distinctive form, which is the main reason they can be recognized as temples. This is the archaeological plan of the Ørsta temple, and at the top is a digital reconstruction. The key to the form is the four large posts forming a square in the center, almost certainly to hold up a central tower. The same technique was used in some medieval stave churches. The building was about 45 feet (14 meters) long and 26 feet (8 m) wide, and it may have been up to 40 feet (12 m) high.

The best example of such a building is at Uppåkra in southern Sweden, which I wrote about two years ago. 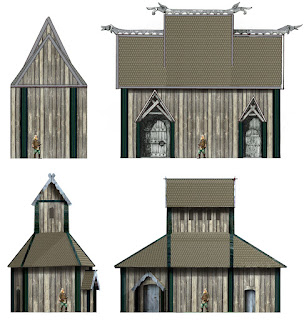 Both Uppåkr and Ørsta were the seats of very wealthy, prominent families. The building of temples seems to be related to the rise of these mighty kings and jarls, who dominated the politics of the Viking age. By building temples next to their halls they took charge of the religion of their communities, tying all their neighbors even more closely to their authority.

Wait, John, what about Norse openness and tolerance?

I see tolerance in every slat and joist. Not that I actually know what a joist is, or if the Norse had them. But if they did, I'm sure their joists were notable for their openness.

Indeed, the lack of windows must be to render this a safe space for every sort of person, protecting them from the judgmental gaze.

I've seen several Stave churches, that central tower had probably a chimney function as a fire was lit at the center to warm the temple.

The Norse were neither more nor less tolerant and open than any other people. They lived on scarce resources, and at times were forced to piracy to steal goods from coastal populations, which rendered them infamous. When in peace, they lived in harmony and were kind to each other. One of their tribes, the Varangians, descended from Laponia to Kiev by the Volga, and had quite open, tolerant and peaceful trade relations with other people, Muslims and Greeks and Asians. The would be known as Rus'.