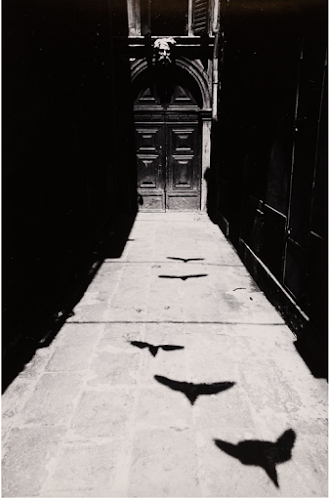 Photo of Venice by Ikko Narahara

At La Hoya in northern Spain, archaeologists uncovered evidence of a massacre around 350 BC, with maimed bodies lying in the streets. The burned town was still full of valuable goods, and some of the dead were still wearing jewelry, so this attack was all about killing.

Cool 5-minute video of a dive to the bottom of the Antarctic Ocean, 1000 m down.

The economics of vending machines.

Unable to overthrow any government, al Qaeda and the Islamic State are increasingly fighting each other: "internecine fighting has claimed the lives of some 300 jihadists in West Africa's Sahel region since July alone."

Kwame Anthony Appiah looks into the political complexity of Blackness in Britain and the US; identity, he says, is fractal, and any group can always be subdivided further. (NY Times)

Tool-using ants build siphons to wick sugar water out of containers, keeping them from drowning.

Learning from television how the upper class lives: "I'm not rich," I said, "I just watch a lot of TV." (NY Times)

2020 Wildlife Photographer of the Year.

The grapefruit and the crazy history of citrus. I had no idea.

"A new rule in the Federal Duck Stamp Contest, requiring artists to include hunting themes in their submissions, has raised eyebrows and objections in the duck painting community." (NY Times)

Young people these days: Brigham Young University-Idaho threatens to expel students who intentionally get Covid-19 so they can sell their antibody-rich plasma.

Treaties spell out how the US and Mexico divide the water of the Rio Grande and the Colorado River, but this year there isn't enough water to go around, so Mexican farmers seized a dam and blocked water shipments to the US. (NY Times)

The coronavirus and the nationwide shortage of refrigerators.

Xi Jinping promised a while back that China would be "carbon neutral" by 2060; now a team of Chinese experts has produced a plan showing how that might happen.

Good essay by Jamelle Bouie arguing that "originalists" like Amy Coney Barrett pay too much attention to the Constitution of 1787 and not nearly enough to its major revamping in the post-Civil War era embodied in the 13th, 14th, and 15th Amendments. (NY Times)

Young people these days: Brigham Young University-Idaho threatens to expel students who intentionally get Covid-19 so they can sell their antibody-rich plasma.

This sort of thing isn't new.

The British Raj once put out a bounty on cobras, payable upon receipt of the corpse or skin of a slain snake. People came out of the woodwork to collect these bounties, but the snake population didn't decrease. It was quickly uncovered that people were catching and breeding cobras to make money. So in response they revoked the bounty - which caused the cobra population to explode overnight, as huge numbers of the breeders just released their now worthless snakes into the wild to get rid of them.

This is always what happens when you attach monetary compensation to these things.

If you start to pay people to surrender their plasma, you're going to get poor and desperate (or greedy and stupid) people who sell plasma as often as they are allowed, regardless of the health risks, because they want / need the money.

And if you pay people more for plasma that has Covid-19 antibodies, you're going to get poor and desperate (or greedy and stupid) people intentionally infecting themselves with a deadly pandemic, in order to increase the amount of money they can earn, and damn the consequences to other themselves and others.

People with enough food to eat don't steal bread. People with a roof over their heads don't sleep on park benches. People with enough money in their bank accounts don't mug people in the streets. People who are mentally healthy enough don't commit violent or destructive acts. Crime exists because poverty and misery exist.

"Young people these days" are just responding to the world they find themselves - a world where they can't afford to visit a doctor for basic preventative care, but where doctors will happily encourage them to sell their blood to make ends meet.

Don't blame young people, blame their parents and grandparents, who built the world the young people find themselves in. If they didn't want their children and grandchildren to intentionally infect themselves with a deadly disease, they shouldn't have helped incentivize such behavior financially.

This is probably blasphemy, but I didn't like the photography. The photos have an oddness about them that make them feel unreal to me. I don't know if this is because they've been touched up, filtered, or what, but it grates on me.