The Hermit of Broo 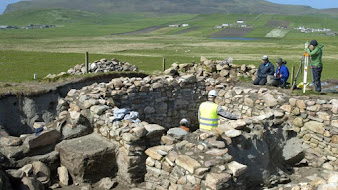 Broo, in Shetland, was an unremarkable village, shown on maps but not much commented on by anyone. Then in the late 1600s it was swallowed by sand dunes and abandoned, an event that drew curiosity seekers from as far as Scotland.

Archaeologists recently dug into the site to find what was left. The discovered that after the abandonment and the parade of tourists scanning the ruins, somebody went back. The somebody dug down into one of the nearly buried houses and built a wooden staircase connecting it to the surface, living there for long enough to leave a clear archaeological signature. Perhaps years.

The leader of the dig said that the sand-buried site must have been a "grim" place to live.

So who was it?

I raised the question over dinner tonight and we came up with: an outlaw on the run, a madman, a very cranky man who refused to leave his old home, and (my contribution) a shaman driven half mad by his visions who went off to live away from all stimulation except the surf and crying seagulls, occasionally sought out by people desperate enough for help to brave his fearful reputation and the abuse he hurled at anyone who approached.

Then in the late 1600s it was swallowed by sand dunes and abandoned, an event that drew curiosity seekers from as far as Scotland.

As far as -Scotland-, you say? Literally Shetland's nearest neighbor, with Orkney a mere 50 miles away, easily and routinely reached by sail in about eight hours?

As for who lived there, well... people don't change much. Ask yourself, who would do that sort of thing today?

If it was too well inhabited to be a bolthole for a smuggler or criminal fugitive or similar, then I can only assume it was some crotchety widower with the attitude, "I've lived here all my life, I buried my wife here, I don't care if the whole village is going to destroyed, I ain't movin'!"

My first thought was something like Verloren's. I imagined someone who had just won a lengthy lawsuit over a particular house and plot, and they were damned (perhaps literally) if they weren't going to live there no matter what.

Then again, I have this memory that in Scotland at this time, living in an unclaimed spot could give you title to it. There was a phrase, kindling fire and something else; it's somewhere in John Prebble's book on Glencoe.

It's got to be about the house, I think. Digging through dunes and building a staircase through the hole sounds worse than hard. And someone like that might have been so obsessed with house and land, and that particular bit of ground, that they could develop a truly strange, visionary relationship with it. Not exactly a shaman, but uniquely haunted nonetheless.

In late 17th century Scotland, one might also look for a Jesuit on the run, or a Covenanting preacher so harsh that even his own Covenanting congregation couldn't stand him. You could get to visions that way too.

I am reminded of the crazy people who refused to be bought out of their homes in Centralia, PA, where the coal under their feet is all on fire.

There are no stories of mistery and wonder anywhere like in Scotland, and the Scottish isles mainly. You can count hundreds of oral stories and storytellers. Remoteness and loneliness favour that ambiance, but it is part of the character of peolpe also. They don't need the rest of the world for legends.