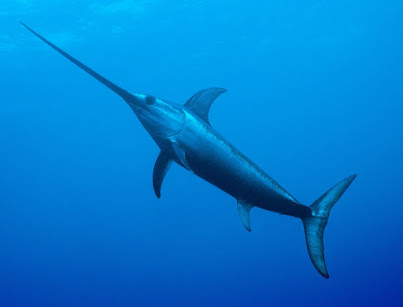 Nautical folklore has always been full of swordfish using their long bills as weapons. Sailors have long reported seeing swordfish drive their swords through boat hulls, kill people and each other, and so on. But over the past century scientists have been skeptical. Yes, there are confirmed cases of swords stuck through boat hulls, but maybe those were accidents; the swords just don't seem like they would make very effective weapons, and there isn't much video or other evidence to confirm sword attacks. Until recently, anyway:

The first victim washed up in September 2016. The police in Valencia, Spain, saw a blue shark dying in the surf along a tiny stretch of beach. They lugged the eight-foot corpse to the yard behind the police station. Then they called Jaime Penadés-Suay, who soon suspected foul play.

The shark had what looked like a bit of wood embedded in her head. He pulled. Out slid a broken fragment from a swordfish sword that had lanced straight through her brain.

“I thought it was crazy,” said Mr. Penadés-Suay, a graduate student at the University of Valencia and a founder of LAMNA, a Spanish consortium that studies sharks. “I was never sure if this was some kind of joke.”

But since then at least six more sharks have washed up on Mediterranean coasts, each impaled with the same murder weapon, and almost always in the head. In the latest example, an adult 15-foot thresher shark — itself equipped with a whiplike tail capable of stunning blows — washed up in Libya. Inside was a foot of swordfish sword that had broken off near its heart.

Taken together these cases offer what may be preliminary scientific evidence of high-speed, high-stakes underwater duels that had previously been confined to fisherman’s tales.

Awesome. File this beside the evidence that thresher sharks really use their long tails as weapons, too.