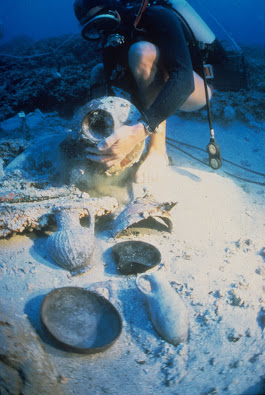 In 1982 a sponge diver told an archaeologists that he had seen "metal biscuits with ears" on the sea floor near a point called Uluburun, on the south Turkish coast about halfway between Cyprus and Crete. Thus was begun a grand archaeological project that took ten years to complete and eventually filled a whole Turkish museum with Bronze Age artifacts. Sailing ships were of course one of the most important new technologies of the Bronze Age. Developed, it seems, in Egypt, they dramatically shrank the world, leading to a surge in long-distance trade far beyond anything seen before. 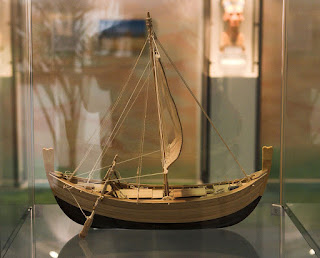 At that time the Uluburun Shipwreck was the oldest seagoing vessel ever discovered, dating to around 1300 BC. The ship was around 50 feet long (15-16 m). It was constructed by fastening boards together using the mortise and tenon method, without much of a frame, a technique called "shell first." It would have been flexible in the waves but easily smashed if it hit anything. 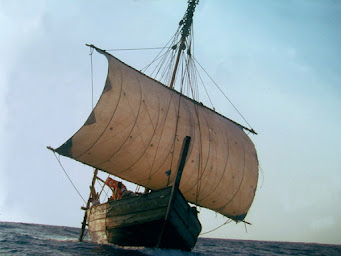 This is a replica of the ship, the Uluburun II. The wood of the original was cedar from Lebanon. The stone anchors were also from Canaan, as were some of what were taken to be personal items belonging to the crew, so the ship probably sailed from the region later known as Phoenicia. 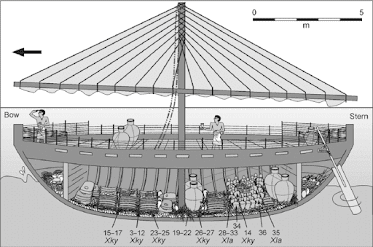 It's cargo is extraordinary, the best evidence available for trade in the Late Bronze Age. 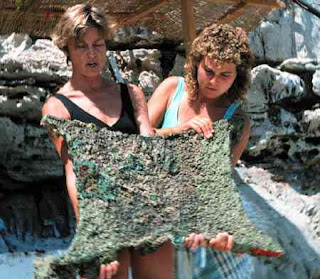 Half of the 20-ton total was made up of more than 400 copper and tin ingots, in the ratio of 10:1 that was normal in bronze of the period. This in itself is fascinating since copper came from Cyprus and the tin from Turkey's Taurus Mountains, meaning the ingots had traveled some distance and passed through many hands before they were loaded onto this ship. 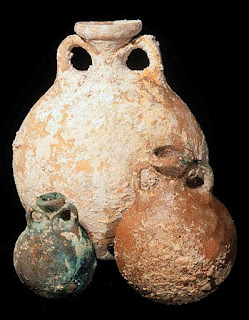 And the third biggest part of the cargo was 130 jars full of Terebinth resin, collected from a tree of the pistachio family and used for perfume, incense, and probably lots of other things. The pottery on the ship was mostly from either Cyprus or Palestine, but some was Egyptian 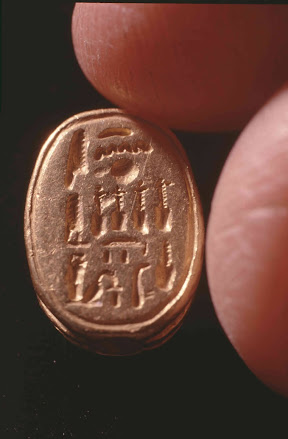 The rest of the cargo is even more remarkable. At least ten different cultures are represented, from sub-Saharan Africa (elephant ivory, ostrich egg shells) to the Baltic Sea (amber). This is a famous artifact, a gold Egyptian scarab that mentions Queen Nefertiti. 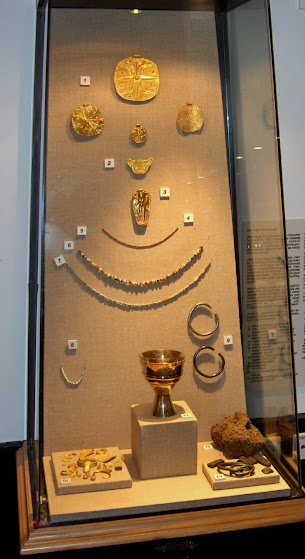 Display of gold artifacts in the Turkish museum. 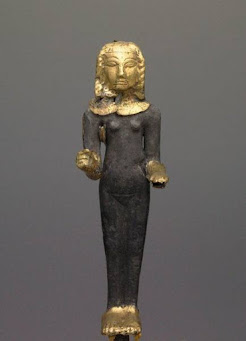 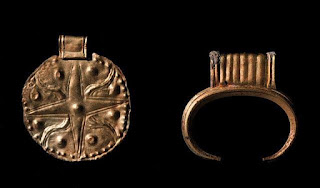 Small idol and a gold medallion. 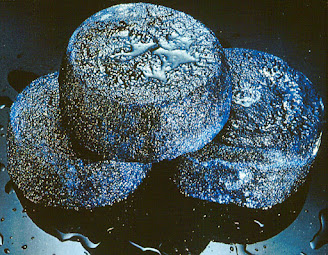 Ingots of blue glass; 175 glass ingots of various colors were found. Glass seems to have first been made by people in Egypt, but from a very early date it was also made in Syria, using identical techniques, and telling the difference between Egyptian and Syrian glass is hard. As you can see, glass was also traded as a raw material, so even if you could chemically source the sand that went into it that wouldn't necessarily tell you where it was finished. The minerals used to give it color were also widely traded, making further complications. So, no, we don't know where this came from. 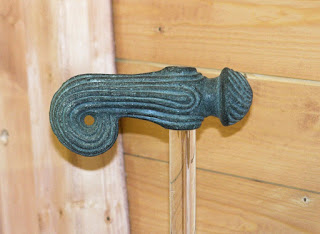 Mace or scepter head made of Andesite from Bulgaria. If, as people usually assume, this ship was headed west to Crete or Greece, why was it carrying Bulgarian Andesite? This is just one of many puzzles. 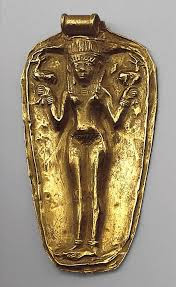 The full list  of the cargo includes tools, weapons, beads, ceramic lamps, a trumpet, two balances with stamped weights, lyres with tortoise-shell sound boxes, raw semi-precious stones such as agate and carnelian from Afghanistan, and more. It's a truly extraordinary find, with more interesting data than has come from the excavations of some whole cities. Archaeology is like that. Hard work is necessary but not sufficient; to really change our understanding of the past  you also need to get lucky.
Posted by John at 6:53 PM

"Mace or scepter head made of Andesite from Bulgaria. If, as people usually assume, this ship was headed west to Crete or Greece, why was it carrying Bulgarian Andesite? This is just one of many puzzles."

Why did ships sail from England to the colonies laden with finished goods made from raw materials harvested in America?

Just because the stone comes from Bulgaria doesn't mean that's where the craftsmen skilled enough and/or willing to work it into a finished product lived.

The same principle could also explain the bronze ingots - as I understand it, the knowledge of bronzemaking was carefully controlled in that era, guarded even more jealously than the locations of the mines which supplied tin.

You wouldn't set up a bronze foundry just anywhere - you'd keep it in a highly controlled and secure location, where you can protect the secrets of the craft - both the physical infrastructure necessary to perform the work, and the master metalworkers with the knowledge that makes such work possible. The raw materials come to you, not the other way around.

It doesn't matter if the tin has to travel 500 miles to get to your foundry, and the copper another 100 miles beyond that (and across the sea to boot). We're talking about an age of God-Kings and armies of slave laborers. The people mining and transporting the raw metals are relatively unskilled, unimportant, and disposable - whereas the master metalworkers using secret knowledge to create the most strategically important metal of the age are indispensable and irreplaceable.

Verloren may be right, and the explanation may be exclusionary and/or oppressive and thus reflect ill on humanity and its ways.

But if we find single items without obvious economic rationales (or whose presence seems to defy obvious economic rationality), I wonder if perhaps we're looking at evidence of a kind of special order or postal system. Perhaps someone in Phoenicia was sending someone in Crete the Andesite item as a special gift (the specialness of which would be increased by the long, roundabout path the item, or at least its materials, had traveled). Maybe the Cretan had visited the sender, and admired it, and now the sender was gifting it to them. Maybe there was a "My father wanted you to have this" aspect. Etc.

I assume it has to be something like that, but that tells us something important about Bronze Age trade: that it was efficient and safe enough to make such round-about trade and gift exchange possible. If something has to travel both ways, then the shipping has to be twice as efficient to make the whole exchange sustainable.

I suppose it depends on what one means by efficient. If one means that the shipping was reliable, then yes. But if one means efficient in a green eyeshade, bean-counting way, I'm skeptical. Part of the point of gifts is that they're not efficient. Indeed, I'm not sure what a phrase like "twice as efficient" would even mean in that context. And a lot of the trade was in items like incense, which, as I understand it, were mostly used in religious ceremonies--that is, they honor the gods by being precious, difficult-to-obtain, non-economically-efficient items (apart from the fact that, if the god asks for resin incense from farthest Arabia, you give them resin from farthest Arabia).

I can see that the system would have to be sustainable for the sailors or other transport personnel. But for the senders and receivers?

Of course, in the long run Bronze Age civilization wasn't sustainable, was it? Indeed, not long at all after the date you give for the shipwreck, the angry, Trumpish hordes came out of their villages and smashed the whole cosmopolitan, soft-handed, Bronze Age THING, didn't they? (Or the Sea Peoples did it, or the Mitanni, or whatever . . .)

I think a detail that would perhaps help clarify things might be what was the "barrier to entry" for someone who might want to own and operate such a ship?

These are relatively small vessels, with small crews - a cargo of 20 tons is puny compared to relatively early medieval vessels like the cog, which frequently could carry ten times that amount. But I don't know enough about the technology or economy at the time period to know what relative value these vessels would have had then.

What would the cost of building and operating one realistically be? Would they still be resource and labor intensive enough to relegate them mostly to governmental control? Or might they have been relatively cheap and abundant, within the reach of well off individuals? Put simply - were they Model T's, or were they F-15s?