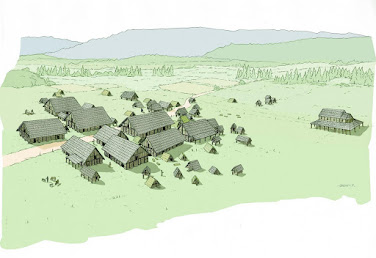 Archaeologists working in eastern France have uncovered a Frankish settlement dating to the sixth and seventh centuries. The settlement was built pretty much all at once, occupied for about 150 years, then abandoned. The population seems to have been from elsewhere, come or sent here to found this community. This area was part of the Burgundian kingdom, and the settlement may have been founded after the Frankish conquest in 534 as a way of controlling this part of the territory. 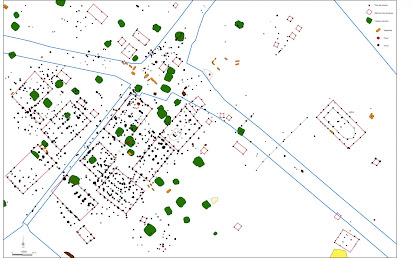 I love this plan. I spent a lot of time in the 1980s trying to interpret patterns of post holes, so I was immediately fascinated by this image. I invite you to enlarge this and play the "sorting post holes into structures" game; I found a couple of places where I would have done it differently than the excavators. But pay attention to the different sizes of the posts; a lot of their interpretation is based on thinking that the biggest posts mark the corners, which may well be true. Notice the perfect apse on the church, the building off by itself to the right. The excavators called this site Gravilliers. or Gravel Pits, so I imagine that must be what the green blobs are. 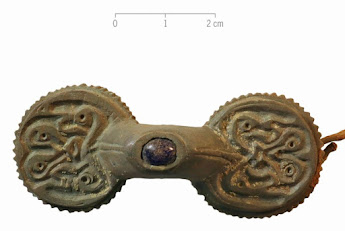 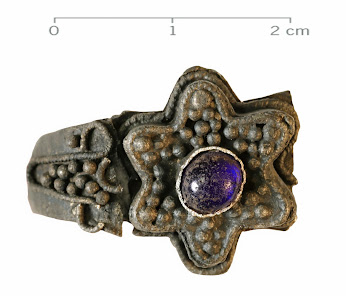 The cemetery at the site contained quite a few rich graves. Nothing royal or even suggesting the upper aristocracy, more like the knightly class. The sort of people who might have commanded a small military outpost in a recently conquered territory. 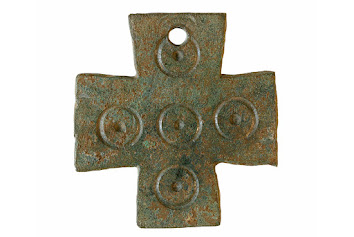 I suppose the historical takeaway is that the Franks, like other conquerors, had standard ways of settling some of their own people in conquered districts. Presumably this both rewarded their key men with land and office, and placed them where they could keep an eye on the locals.

Amazing. That is the kind of post I most admire in your blog. Thank you for the notice and the INRAP link. I wish to publish something on this too, it's fascinating. These Merovingians are contemporary of Vikings, so it's no wonder their iron jewelry has similarities.
Just one more remark. I don't think the camp was named "Gravilliers" after Gravel Pits. It is just the name of taht area of Pontarlier town, and Gravellier was in fact an artisan in tissue manufactoring: