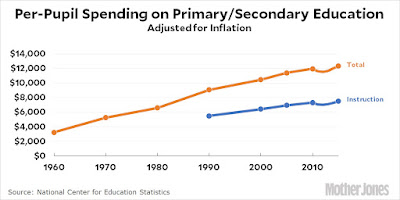 Despite what you may have heard, per pupil education spending in the US has gone up a lot and after a dip caused by the Great Recession is it rising again. The chart comes from Kevin Drum, who adds,


Total spending per pupil has doubled since 1980 and quadrupled since 1960. Both total spending and instructional spending have increased by a third since 1990. . . . A per-pupil difference of $1,200 between poor and rich schools is small potatoes compared to the average increase of $7,000 across all schools since 1980.

Our schools do worse than those in some other countries, but not because we spend less money; we are second in the world in per pupil spending after oil-rich Norway.

As to why we do worse, I think the answer is pretty simple: because we care less. We just don't value education in America like many other countries do.
Posted by John at 6:35 PM

That is more than *twice* the actual per-pupil spending currently. So we could easily say that spending for education in the US has been halved since 1960.

In 1960, students with special needs were not educated in the public schools. Special education costs are one of the major drains on 2020 public education dollars. In 1960, disaffected students usually were casually dismissed from schools, at least once they reached 9th grade. Many states did not have minimum ages for dropping out.

So the neediest students: the ones needing the most remediation and special services (even if not technically entitled under federal statute 94-142), were not *in* the schools, and so were not using up the limited funding provided. That means that the $3K -- or 2020-equivalent $26K -- was providing a great deal more for each student actually present in the public school systems.

Meanwhile, equipping a school today requires more dollar-equivalent spending than in 1960. Then having a TV for each room would have been considered an extravagance; now having a computer with broadband internet in each classroom is pretty much a minimum; many schools have classroom sets of laptops or provide each student and teacher with a tablet or laptop. Software to manage school data costs a great deal more than bookkeeping tablets and adding machines. Security for school buildings has become a necessity as well-- 1960 schools did not have "school resource officers" manning secure entrances with metal detectors. Buildings were not kept on exterior lock-down all day, so there was no need for door guards to vet and admit visitors.

I remember the secretaries' excitement when their manual typewriters were replaced with new IBM Selectronics with interchangeable type-face balls!

Comparing 1960 schools to 2020 schools needs to take into account the actual funding levels in constant dollars, the expectations/requirements of service to individual students' needs, the expansion of technology, the expansion of curriculum, and a great many other issues.

Well, comparing ethnic groups in USA to their equivalents in their own countries seems to indicate that actually US is doing quite OK.