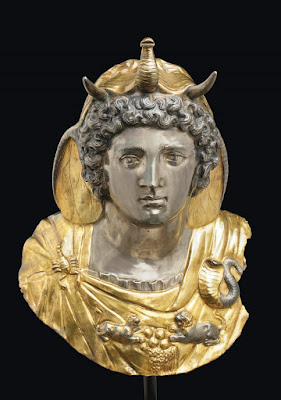 Cleopatra Selene was the only daughter of the famous Cleopatra and Marc Antony. She had two brothers and one half brother, the son of her mother and Julius Caesar. After her parents' defeat in 31 BC she was brought to Rome and paraded in chains at Octavian's Triumph; she would have been about 10 years old. She was then placed in the household of Octavian's sister Octavia. A few years later she was married to Juba II, who had been the King of Numidia until the Romans took his kingdom and made it a province. Octavian sent Juba and Cleopatra to rule over Mauretania, more or less the coast of modern Algeria, which at the time was a Roman protectorate. By then her brothers were all dead (no source says how), leaving her the only surviving Ptolemy. She was said to have been an active queen, promoting a pro-Roman policy, and her only son ended up inheriting the kingdom. 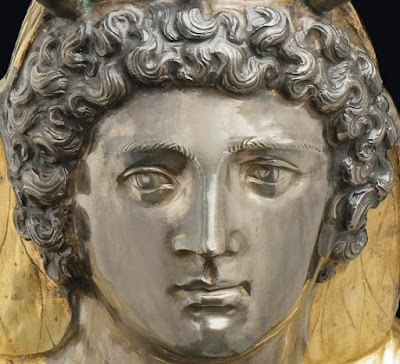 In 2011 this item was auctioned by Christie's as


A ROMAN PARCEL GILT SILVER EMBLEMA OF CLEOPATRA SELENE
CIRCA LATE 1ST CENTURY B.C.-EARLY 1ST CENTURY A.D.
Raised from a single sheet, superbly sculpted in high relief in the form of the bust of a young woman wearing an elephant headdress over the top of her head, its raised trunk and tapering tusks projecting forward, all separately made and inserted, the skin crosshatched, each diamond punctuated by a central dot, its broad ears descending along her neck, the woman with her head turned slightly to her right, with luxuriant curly hair massed in two rows of thick serpentine locks, her striking face with a high smooth forehead merging with the bridge of her long slender nose, the nostrils indented, her large eyes with heavy upper lids, the pupils and irises indicated, the brows delicately incised, her small mouth with a full lower lip, the philtrum drop-shaped, the prominent chin rounded, wearing a chiton crenellated along the collar and a himation with broad U-shaped folds, buttoned on her right shoulder, embellished with a scorpion on her right shoulder, a cobra on her left, a lioness and a lion at her chest, fruit and wheat between them; the himation and portions of the headdress gilt
6 7/8 in. (17.4 cm.) high 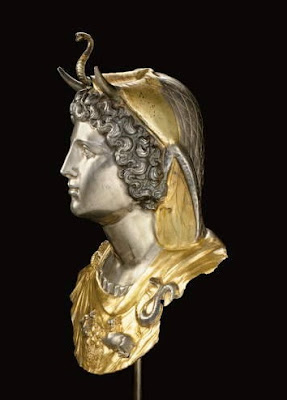 It sold for $2.5 million, so somebody thought it was genuine. But the only provenance offered on their web site is "New York art market, 1996", which makes me wonder. It could only have survived this well in a tomb, and which tomb? Where? If it is real it is certainly amazing. Heck, it's pretty cool even if it's a fake. 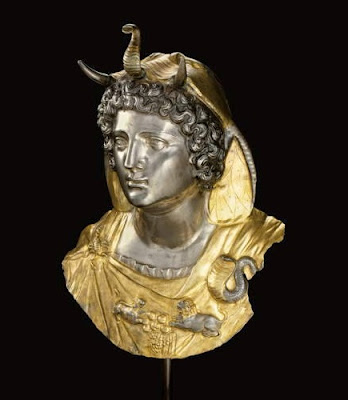