How Spencer Clark Got his Face on the 5 Cent Bill 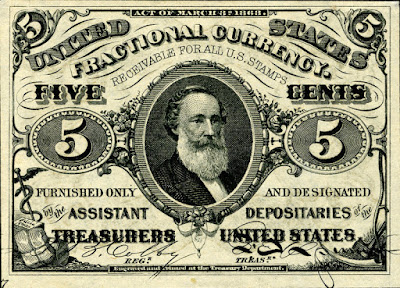 During the Civil War, the Federal government encountered a shortage of the metals needed to make coins and began printing notes in denominations as small as three cents. This led to further hoarding of metal coins, etc., and the government ended up printing small notes down to 1876.

In 1866, Congress decided to issue 5 cent notes to honor explorer William Clark. But they made a small oversight. Atlas Obscura:


Allegedly, the document that reached the Treasury specified only that the new bill should honor “Clark,” without clarifying which one.

This caught the attention of Spencer M. Clark, the Superintendent of the National Currency Bureau and already a notorious character.


Clark, despite surely knowing Congress’s true intention, seized the opportunity to print his own face on the bill.

Some things never change! (Although it should be noted that an investigation exonerated Clark.)


One Congressman in particular—Pennsylvania Congressman Russell Thayer—”took immediate exception” to Clark’s five-cent note when he learned of it in February 1866. That March, he amended an appropriations bill to say “hereafter no portrait or likeness of any living person shall be engraved or placed upon any of the bonds, securities, notes, or postal currency of the United States.”

During his speech in the House, Thayer said:


I hold in my hand a five-cent note of this fractional currency of the United States. If you ask me, whose image and superscription is this? I am obliged to answer, not that of George Washington, which used to adorn it, but the likeness of the person who superintends the printing of these notes … I would like any man to tell me why his face should be on the money of the United States. It is derogatory to the dignity and the self-respect of the nation, I trust the House will support me in the cry which I raise of Off With Their Heads!

Congress passed the Thayer amendment on April 7, 1866. And that, my friends, is how the US ended up with a law specifying that our money can only feature dead people.
Posted by John at 10:38 AM

Now that's a beard and 'stache. He fill the photo nicely.

Congress passed the Thayer amendment on April 7, 1866. And that, my friends, is how the US ended up with a law specifying that our money can only feature dead people.