Wislawa Szymborska, "The End and the Beginning" 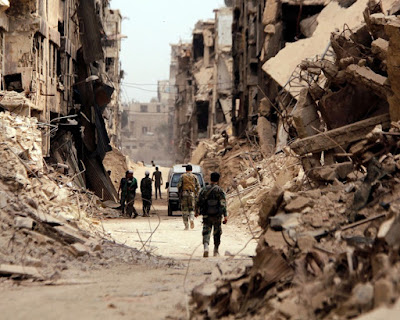 After every war
someone has to clean up.
Things won’t
straighten themselves up, after all.

Someone has to push the rubble
to the side of the road,
so the corpse-filled wagons
can pass. 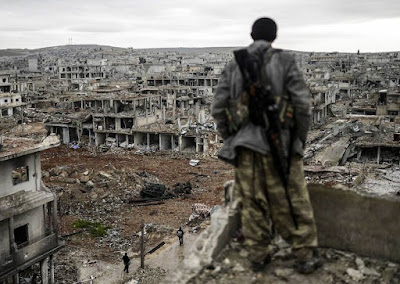 Someone has to get mired
in scum and ashes,
sofa springs,
splintered glass,
and bloody rags. 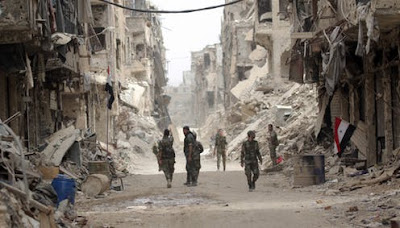 Photogenic it’s not,
and takes years.
All the cameras have left
for another war.

We’ll need the bridges back,
and new railway stations.
Sleeves will go ragged
from rolling them up.

Someone, broom in hand,
still recalls the way it was.
Someone else listens
and nods with unsevered head.
But already there are those nearby
starting to mill about
who will find it dull. 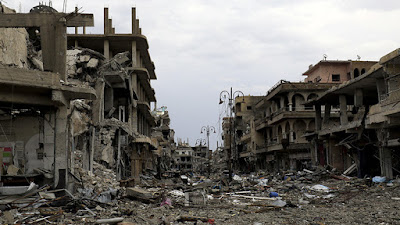 From out of the bushes
sometimes someone still unearths
rusted-out arguments
and carries them to the garbage pile.

Those who knew
what was going on here
must make way for
those who know little.
And less than little.
And finally as little as nothing.

In the grass that has overgrown
causes and effects,
someone must be stretched out
blade of grass in his mouth
gazing at the clouds.

Pictures are of Syria, where, I read, the civil war is nearly done.

I've long said that part of what plagues America is that we're so isolated from the aftermath of wars.

Europeans need only go back to World War II, still just within living memory, but Americans haven't dealt with the results of mass combat in their own backyards since the 1860s - and even then, most of the fighting took place in the field, and what urban combat took place wasn't anywhere near as devastating.

We are a nation that almost always fights offensive wars in other people's lands, and the bulk of our population only ever feels the effects of such conflicts through economic strain or reading / hearing about events in the news.

This warps our cultural perception of war to an absurd degree, and shapes our reactions dramatically. Terrorists destroy the World Trade Center and we're sent absolutely reeling, because we're just so unused to the idea of other people blowing up our buildings and killing our citizens, despite our long history of routinely leveling huge swathes of other people's countries.

We have the collective mindset of an opportunisitic bully who never fights where there's risk to himself, and the one time someone catches him square in the face with a surprise punch, it's emotionally devastating to an incredible degree. How DARE someone else do to us a tiny fraction of what we do to others!

Personally I do not like poems of Szymborska. They always seem better in translation than in original, they just do not speak to me. And that's not counting her problematic behaviour during Stalinism (I'm saying here about her signature under a letter supporting a decision of Stalinist court issuing death penalty for priests accused of cooperating with USA, not about her poems praising Stalin)

As a war poet, I prefer Różewicz. "Led to slaughter, I survived; Those are empty and equivalent words: men and animals, love and hate, friend and enemy, light and darkness" ("Survivor") dealing with psychological scars of war; or by Baczyński "We were teached: there is no pity" (in his "Generation'). Those are much powerful in Polish- and, to my chagrin, seems not to be translated into English, despire deserving it much more than correct poems by Szymborska.

Hmm, seems Baczyński was translated in English, but quality of this translation is rather poor and does not seem to me to carry the same emotions (plus it changes the meaning sometimes, as from "We were teached" to "we learned our lesson") http://www.sppw1944.org/index.html?http://www.sppw1944.org/poezja/poezja_baczynski_eng.html

Thanks, that's a fascinating poem.