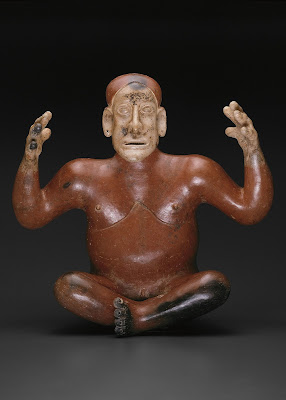 Figurine of a storyteller from Jalisco, Mexico, AD 100 to 800

Ross Douthat thinks the West is "Decadent," by which he means stuck in the doldrums, without much creativity in any dimension.

David Brooks contemplates the decline of extended families and recent attempts to bring them back.

Review of two books that blame economists and their style of thinking for many of our woes over the past 50 years.

Mudlarking: exploring the banks of the Thames in London for bits of the city's past.

The Bible says that Kings Hezekiah and Josiah closed all the other temples in Israel and centralized all cultic activity in Jerusalem, but archaeology shows that other temples continued to operate quite close by.

Why have sales of DNA test kits fallen?

The Saadi Empire in Morocco, a sixteenth-century success story enmeshed with the rise of England in ways I never knew until today.
Posted by John at 7:29 AM

The thing that blows my mind is the Aeolipile, a basic radial steam turbine invented sometime around the first century. The Ancient Romans had everything they needed to develop STEAM POWER, and they simply failed to recognize the potential of it!

Imagine how radically different the world might have been if they put two and two together and pursued further development of the technology! It's a dizzying thought.

There's a term I hear occassionally that I really like, but that I'm fairly confident is still a sort of modern slang among younger folks - "Thought Technology".

But "thought technology" refers to advances in how we manipulate ourselves and our minds - changes in our capacity to understand things and organize our thoughts. For example, Feudalism is a kind of thought technology, because the only thing that ever stopped earlier people from using it to structure their society is that they hadn't yet conceived of the idea and collectively embraced it.

You can have all the knowledge necessary to manipulate the physical world in a way that produces a given technology if you only think to do it, but if society isn't ready to conceive of such a thing, it simply doesn't happen.