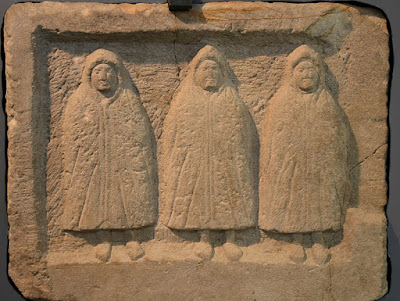 Relief of the Genii Cucullati, "Hooded Spirits," from Housesteads on Hadrian's Wall. Nobody knows who these three figures were or what they meant to the people who carved images of them around the Romano-Celtic world.

The intriguing career of Madame Sul-Te-Wan, the first black actress to land a studio contract in Hollywood.

The three versions of the Armada Portrait of Elizabeth I are being displayed side by side for the first time.

An expert on con artists and a fundraiser talk about how to ask people for money.

New Yorker columnist John Cassidy reviews the economics and politics of growth and stasis: many environmentalists think we need to halt economic growth, but is that even possible? How could it be done, and what would happen?

Roboanalysts outperform human investment consultants, on average. According to this study, anyway.

New Zealand has started giving out 2% of its scientific grant money via a lottery, and scientists generally approve.

According to a study that got the World Bank's chief economist fired, at least 7.5% of aid to poor nations is diverted into offshore banking havens, in some cases up to 15%.

Iron in the ocean and Ice Ages. If we want to control global warming we should really be looking harder at this.

Who is more radical, Bernie Sanders or Jeremy Corbyn? Sanders, by a wide margin.

A new conservative think tank devoted to fighting "market fundamentalism" on the right.

The career of a small-time Naples mobster.

YouTube's algorithm is not causing political radicalization.
Posted by John at 7:09 AM