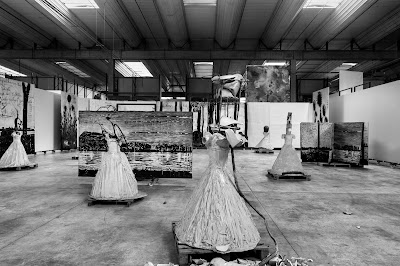 Here's a real treat for me: my favorite writer on art, Norwegian novelist Karl Ove Knausgaard, writes a long profile of Anselm Kiefer, one of my favorite contemporary artists. On Kiefer's airplane hangar-sized studio::


“That’s great,” I said, following her into Kiefer’s studio itself, which opened up like a canyon before us.

I had never seen anything like it. The hangar-like space was gigantic and filled to the brim with art. It was like a world inside the world. Huge metal slabs were leaning against the walls. Helter-skelter around them, on racks with wheels, stood large paintings of oceans and beaches, rivers and meadows, mountains and forests, some covered with corroded ravines of lead. Vitrines in every size were standing everywhere, filled with the strangest things: the roots of trees, rusty hammers, little clay pigs. Shelves that ran the length of the hall were stacked with balance scales, hooks, rifles, stoves, snakes, torpedoes, piles of bricks, heaps of dried flowers, even whole trees. There were more full-size fighter jets and a cage that was maybe 300 square feet that was filled with golden wheat and what appeared to be the cooling tower of a nuclear power plant with a bicycle dangling down the side.

It was as if our whole culture surged through this hall, raw and wild, like its subconscious. Could all this really come from one person? Who was this man?

And this, from near the end:


He sat on the other end of the table, and I watched him, noticing how he always put his hand on the person he was talking to, a few seconds’ touch only, on the forearm or shoulder, and how he was beaming as he spoke. Then the smile and the enthusiasm could vanish as if cut off by an ax. The abrupt failure of interest — the humming during breaks in the conversation, the laughter that trailed everything he said — all created a kind of bubble around him, a zone of inaccessibility. Somehow this also applied to his home, where there was a remarkable mismatch between the size of the rooms and the furnishings. The effect was a bit like seeing a room on a movie set — up close it looked like any other room, but taking a few steps back, you realize that the room was inside a huge studio that did not relate to it in any way, but was merely a vessel for it and that feeling of “home” was leaking out of it in every direction.

He turned all his studios into artworks themselves, so it was as if he lived in his art, I thought. If Kiefer was similar to any mythological figure, it must be King Midas: All he touched turned into art. If that was a blessing or a curse, only he could know.