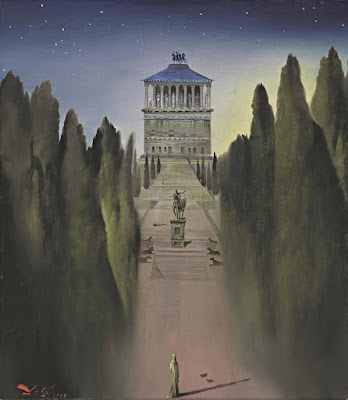 Salvador Dali, The Mausoleum of Halicarnassus, 1955

The people who use electronic surveillance to see what their dogs are doing all day.

The Negro Leagues and the ambivalence of desegregation.

A weekend at prepper camp getting ready for The End of the World as We Know It.

20th-century academics were fascinated by carnival festivals and wrote whole books about the "carnivalesque" while weirdly ignoring one of the most important things about carnival: everyone was drunk.

More libraries are eliminating late fees to attract more users and build relationships with the ones they have.

According to Conor Friedersdorf, voters don't seem to care much about Michael Bloomber's serious past issues with race (stop and frisk policing) and sexual harassment because activists have criticized all the remaining Democratic candidates on these same issues. If an innocuous, well meaning guy like Pete Buttigieg attracts loud Black Lives Matter protesters at every stop, what do you have left for a real racist?

You have perhaps read that some customers are reliable harbingers of corporate doom, always loving new products that end up failing. Journalist Tim Harford thinks he is one.

Genetically, most Mongolians are lactose intolerant, yet they have traditionally lived on dairy products, including fresh milk. The explanation may be the bacteria in their microbiomes.

Psychedelic pioneer Michael Hollingshead, who gave Timothy Leary his first does of LSD, was a con man and all around scoundrel.

The coronavirus outbreak is driving scientists away from publishing their work in journals or even fighting to claim credit for it; most findings are simply being posted online and then dissected on Twitter.

This week's web site: The Bible of British Taste.
Posted by John at 7:05 AM