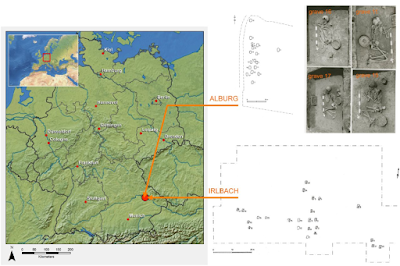 This October I wrote about some DNA results from several Copper and Bronze Age cemeteries near Augsburg in southern Germany. Now there is a new paper on more DNA from the same region, but so far as I can tell the two studies are completely separate.

This study deals with two cemeteries, Alburg (18 burials) and Irlbach (24 burials). Useful DNA was obtained from 34 skeletons. The time frame is 2300-2150 BC. All of the burials are related to the Bell Beaker culture.

The results confirm the basic pattern of the earlier study. The males at both sites all came from the same Y chromosome lineage, R1b M269, which is the most common among the invaders from the Steppes who probably spread Indo-European languages. Each site was dominated by a single family in the male line, at one site through six generations.

The women were much more diverse, with 23 different mitochondrial DNA types among the 34 people in the sample. Also, none of the women were closely related to each other, except a couple of mother-daughter pairs. The pattern is clearly women leaving home and moving into patrilineal households. It seems that the marriages were monogamous; there are no examples of a man having children with two different women, nor of two women who might have been co-wives in the same generation. (That doesn't say anything about men having bastards with servants or whatever, it just applies to official offspring who would have ended up buried in the main family cemetery.) These seem to have been nuclear family households, without any cousins in residence.

One of the interesting things about the article is that the authors relate to this marriage pattern to the problem of how Indo-European languages became so dominant, even though the invaders were majority male:


Recent research comparing patrilocal and matrilocal marriage system in traditional societies in Indonesia demonstrated that these two institutions had different consequences for both language dominance and genetic dominance. The results were summarized as follows: “When multiple languages are present in a region and post-marital residence rules encourage sustained directional movement between speech communities, then languages should be channelled along uniparental lines. Over time, these kinship systems shaped their gene and language phylogenies”. Consequently, women marrying into patrilocal communities were forced to adopt their husband’s language. Such a situation could well resemble third millennium BC Europe. If Indo-European speakers were the ones to introduce a system of patrilocal exogamy, women from one or multiple originally non-Indo-European-speaking communities would have moved into Indo-European speaking communities, and adopt their language. Over time this would lead to an increased genetic and cultural dominance and the consolidation of one or more Indo-European dialects.

Fascinating. Think of what we are learning here from decayed DNA molecules in old bones: family structure, marriage patterns, possible insights into how Indo-European languages spread at the level of households.
Posted by John at 8:46 PM