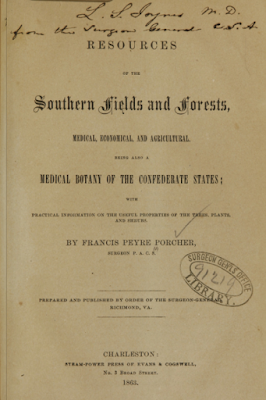 
During the height of the Civil War, the Confederate Surgeon General commissioned a guide to traditional plant remedies of the South, as battlefield physicians faced high rates of infections among the wounded and shortages of conventional medicines. A new study of three of the plants from this guide—the white oak, the tulip poplar and the devil’s walking stick—finds that they have antiseptic properties.

Scientific Reports is publishing the results of the study led by scientists at Emory University. The results show that extracts from the plants have antimicrobial activity against one or more of a trio of dangerous species of multi-drug-resistant bacteria associated with wound infections: Acinetobacter baumannii, Staphylococcus aureus and Klebsiella pneumoniae.

I wrote about this general topic before, apropos of some Anglo-Saxon remedies. Bacteria evolve very fast, so they can quickly acquire resistance to compounds they encounter. But maybe if we stop using some treatment they can just as rapidly lose their resistance to it. So maybe compounds that were found ineffective during the early twentieth century when doctors got serious about scientific testing, might have worked at some time in the past, and maybe they will one day work again.
Posted by John at 9:46 AM