"Now on My Way to Meet You" 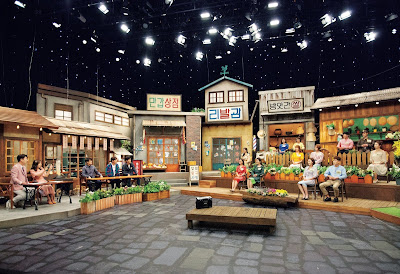 Weirdly fascinating article in the Times about the fusion of Korean politics with sexuality, comedy, and schlock television:


When it had its premiere in 2011, “Now on My Way to Meet You” was a tear-jerking reunion program featuring families separated by the Korean War, but before the show had a chance to reunite anyone, it underwent a transformation. The way the producers tell it, in their scramble to recruit separated families, they kept running into a new generation of defectors. So they made the rather canny decision to reorient their show around appealing young women, whom they took to calling “defector beauties.” The show’s on-location backdrops of humble homes and noodle restaurants gave way to a glitzy game-show-type set, and estranged septuagenarians were replaced with girlish defectors. Pretty soon, the only thing left of the original program was its name and the desire for reunion. A typical 90-minute episode might veer wildly from a report on rice shortages to a joke about face cream. The aesthetic is loud and frenetic, featuring sound effects and cartoon thought bubbles. At center stage sit a dozen guests, many of them women in short, colorful dresses, their legs all canted in the same direction. The two hosts engage the group in rapid-fire patter, while an all-male panel of B-list celebrities called the South 4 tosses out oohs, aahs and sexual innuendo.

One detail that struck me was the fascination of some South Koreans with a transcontinental railroad. Apparently in 1936 a South Korean competed in the Berlin Olympics for Japan and took a train all the way from Pusan to Berlin. If North and South were at least on speaking terms then that route could be re-opened and South Korea would no longer seem so cut off from the rest of Asia.
Posted by John at 7:41 AM