Game of Thrones and the Difficulty of Being Clever 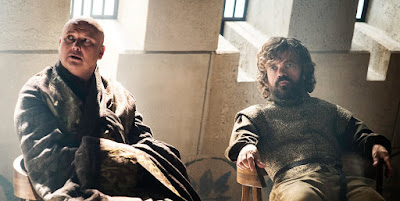 Of all the complaints about the last two seasons of Game of Thrones, the one that resonates with me most is: why did the clever characters get so stupid?

One of the distinctive things about George Martin's world was the prominence of clever schemers. Much of the action in the books was dominated, not by the big guys with swords, but by backstage operators like Littlefinger and Varys the Spider. Even Tywin Lannister seemed to accomplish more by treachery than battle. When Robb Stark was a successful fighter it was by trickery as much as by courage. The best character was the smartest, the dwarf Tryion.

Once the TV show outran the books, all that fell away. Jon Snow's apparent imbecility has become a meme, and after Tryion went two whole seasons without having a single good idea the other characters started mocking him for it. Which was amusing, but a poor substitute for characters actually doing smart, interesting things.

Various writers have offered theories online about why the showrunners "abandoned the smart characters," you know, something about giving up on plot and just going to dragons and fireballs and other easy stunts.

The real reason, I think, that the show stopped having clever tricks or brilliant stratagems is that the writers couldn't think of any. It is hard to come up with clever plots or stunning battlefield maneuvers. A brilliantly sinister ploy like the one Littlefinger nearly pulled off is just hard to imagine; of all the fantasy authors I have ever read, none have come close to Martin in this department. As commenter Observer29830 put it on Youtube:


First rule of writing fiction: You cannot write a character that is smarter than yourself. And the authors of the last season are not particularly stellar.﻿

(Not that the Game of Thrones writers are unique in this; their battles are works of genius compared to the Imperial Bungling at Hoth.)

As I have watched the final season with my children I have continually pointed out better strategies all the commanders could have used in battle, to the point that my children have started to telling me to write my own damn series.

I'd previously missed the post on Hoth, it being made so long ago. That said, I think you've mistaken what the Empires goals and priorities were in that fight, and what some of their logistical issues were.

First up, air support - you can only fly the craft you've got, and the Empire seems to rely heavily on the TIE fighter, which is established as being heavily armed and highly maneuverable but very fragile and lacking shields, and thus reliant on swarm tactics to overpower enemies, with an expected sacrifice of some number of fighters in the process. They're a mass produced weapon, cheap to make and highly expendable.

They could operate both in space and in atmospheres, but they were not long range craft - they were utterly reliant on carrier ships, and couldn't stray too far from their point of origin, nor move very quickly across large distances. Where were all the carrier ships? Up in orbit.

They could have sent their fighters down to the surface, but 1) it would take some time for the ships to get down to the planet, 2) it would have left the carrier ships largely defenseless in the event of a counterattack, 3) the fragile fighters would be highly vulnerable to the static defenses of the rebels, and their primary strength of maneuvarbility would be limited close to the ground, and 4) Hoth is established to be under constant meteor bombardment, because of the surrounding asteroid field, which plays a major role in the story AFTER the battle, and this messes with scanners, communications, and more, presumably due to electromagnetic interference.

Simply put, the TIE fighters available wouldn't be able to scramble down to the surface quickly enough, they'd be flying blind because of electronic interference (remember how the AT-ATs have grainy viewscreens and can barely see their targets even while on the ground and moving slowly?), they'd be under a hail of enemy fire that they couldn't dodge or shield themselves from, AND they'd have to navigate through a constant rain of micrometeors which could shred their fragile hulls.

TIE fighters may have been highly expendable, but not to the point that you would waste an entire swarm on a task they couldn't even hope to complete, ESPECIALLY when they're your primary defense against enemy ships in space and you need them for carrier defense.

All of this vs the Rebels who specfically chose Hoth as a defensible position, and specifically use vehicles and gear adapted to operate within the adverse conditions of the area.

Next up, the Empire's goals.

They were not interested in bombarding the base to smithereens straight off the bat. It could contain valuable intelligence related to the Rebel war effort. They might recover computer records, or capture valuable prisoners. It needed to be taken and thoroughly searched, and could then be demolished at their leisure.

The primary value in taking it, though, was in depriving the rebellion of huge amounts of supplies, vehicles, and materiel, as well as scattering the rebels, hindering their ability to coordinate across the galaxy, and also potentially leading the Empire to other unknown hideouts in their flight.

Strategically speaking, the Empire achieved all their goals at Hoth - they just faced higher than expected losses, and were frustated to realize just how many Rebels managed to escape their ineffectual blockade. But overall, it couldn't be said to be any sort of victory for the Rebels - it was their version of Dunkirk.

Now, why is Vader there? Well, for one thing, they weren't going to bombard the base anyway, since they wanted to capture it intact. But for another thing, it's kind of Vader's thing to show up and lead the troops himself - he's in the middle of doing exactly that when we first meet him, after all.

Vader is the headstrong and dangerous rogue element of the Empire - ignoring or disobeying Imperial officers left and right, making decisions on his own and not feeling the need to explain them to anyone... he's a loose canon, and personally leading the assault on Hoth is perfectly in character for him, even if he's just being hot-headed and impetuous.

But he's not just being hot-headed and impetuous. He's there for a reason. He's mad about losing his prize prisoner, Princess Leia, and wants her back. But he's also intrigued by the young would-be jedi he met previously, Luke Skywalker.

And remember - Vader knows things we don't at this point in the story. After the battle, he's going to specifically follow Leia and Han, ignoring all the other rebels. He's going to risk taking his fleet into a deadly asteroid field, then waste a huge amount of time waiting there for the Millenium Falcon to come out of hiding, all while the scattering rebels get further and further away. Vader even goes so far as to predict their eventual flight to Cloud City, and lays a trap for them there.

Why? Purely so he can use Han and Leia to get to Luke. He needs bait. All so he can persue his personal agenda of confronting Luke, and trying to sway him to the Dark Side. Because he wants them to rule the galaxy together, as father and son.

The Entire Battle of Hoth plays out in ways that make sense, given what we know of the parties involved.

We know the Empire is arrogant, and often underestimates the Rebel capacity to fight back effectively. But we also know that they wouldn't have tried to obliterate the entire base - it's far more valuable captured and looted.

We also know that the Empire are cowards in many ways, and won't risk themselves even where it might make sense - such as sending in the TIE fighters to support the ground assault, even if it leaves the fleet in orbit potentially more vulnerable to a theoretical counter-attack. And we also know that Hoth is a particularly nasty environment, and we see much larger and better equipped craft struggling to operate there - the TIE fighters themselves would be nearly useless.

We also know that the Empire is not a unified force, and that different factions within the Empire are constantly jockeying for influence and prestige over the others. The ground forces at Hoth, personally led by General Veers, quite likely didn't WANT air support, because that would mean they were relying on the Imperial Navy in order to succeed, and their pride wouldn't allow such a thing.