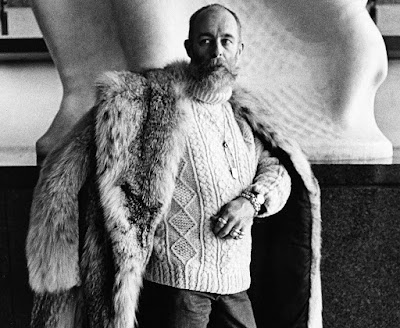 Reading Mark Dery's Born to be Posthumus: the Eccentric Life and Mysterious Genius of Edward Gorey (2018), I was struck by how greatly Gorey changed his appearance and persona during different phases of his life.

After he graduated from Harvard in 1950 Gorey hung around Cambridge and attached himself to the Poet's Theater. In the mid twentieth century there was a vogue for plays in verse; among others, Yeats, Auden, and T.S. Elliott wrote verse dramas. The Poet's Theater was a low-budget space devoted to these plays, a real insider clique whose board of directors included Archibald Macleish, Richard Wilbur, Thornton Wilder, and William Carlos Williams. Gorey threw himself into working for the theater in whatever way he could: set design, creating hand bills, even lettering the tickets. This was a counter-culture but a very academic one, full of tweed jackets, and Gorey blended in.

In 1958 Gorey got a job designing book covers for a New York publisher and moved to Manhattan, embarking on a real New York life. He lived in a tiny apartment where he never cooked, eating every meal out. He became a fanatic for the ballet, attending almost every performance of Balanchine's New York City Ballet. One nights when there was no ballet he often attended a film society that screened silents and other offbeat classics. Gorey began exploring the gay scene and developed the flamboyant persona for which he was long known: floor length fur coats, some of them dyed shocking colors; showy rings on numerous fingers; gaudy necklaces; and on his feet, white Keds (as shown in the photograph above, taken at the ballet). His manner of speaking was high pitched and affected, with lots of sighs and gestures. He seemed flamboyantly gay, although he denied being interested in any sort of sex. It was during this phase that Gorey wrote the little books that made him famous, and people regularly asked him about his persona. Was it a put on? Or was he really just like that? He mostly dodged the question but a few times gave an answer like, "It's a total put on, which makes it my true self." 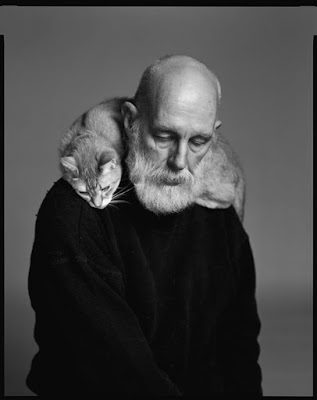 Then in 1985, at the age of 60, Gorey left New York and never went back. He moved to Yarmouth Port on Cape Cod and lived in a small frame house. The fur coats and gaudy jewelry disappeared, and he stopped going to the ballet. Instead of Manhattan restaurants he began eating all his meals at a small town diner. In New York Gorey had never owned a television, but on the Cape he bought one and became a fan of shows like the X-Files and Buffy the Vampire Slayer. He gradually stopped writing books, much to the dismay of his fans, and threw his energy into offbeat local theater. He wrote little plays in verse like the ones he had helped put on back in Cambridge with the Poet's Theater.

It makes me wonder how many people around me are playing parts that they will one day discard. I suspect that not many are; it takes a lot of energy to create such a role and sustain it for years. But I do wonder.
Posted by John at 2:19 PM