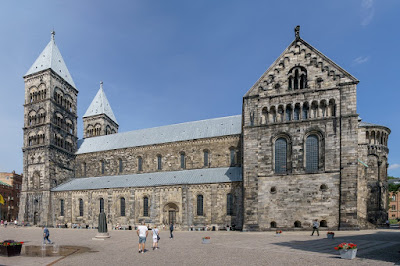 Lund Cathedral in Sweden is a quite nice Romanesque work, construction begun in 1104. Much of the twelfth-century fabric survives, too, although the upper works had to be rebuilt after a major fire in 1234. 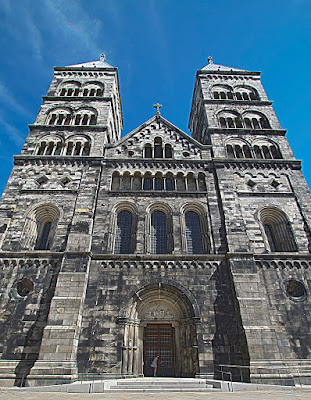 The towers have changed shape over the years; the current form dates to the nineteenth century. 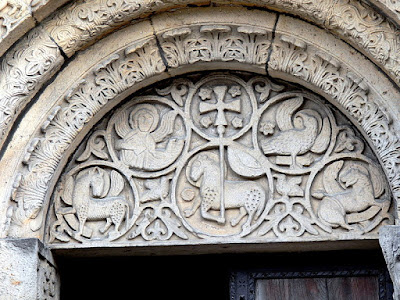 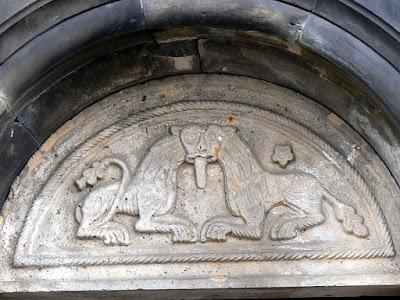 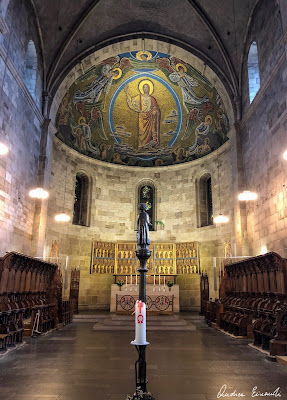 And a downright Byzantine-looking mosaic in the apse. Maybe somebody involved had been in Constantinople as part of the Varangian Guard? 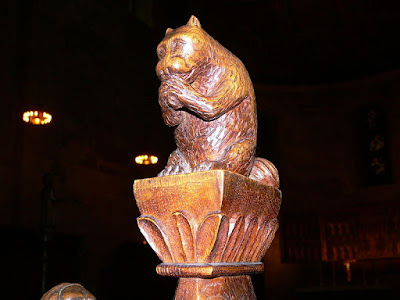 Lots of fifteenth-century woodwork on the interior, including this bear. 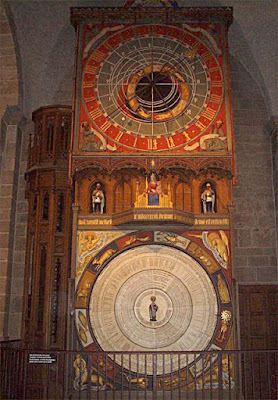 This impressive clock, completed around 1380, is one of the dozen oldest in the world. It has a name –  Horologium mirabile Lundense, the Wonderful Clock of Lund – and its own wikipedia article. 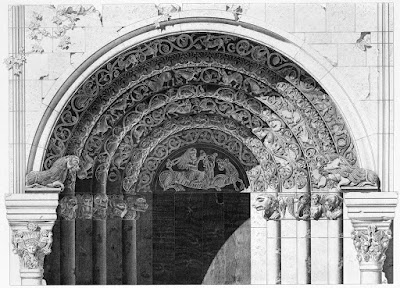 But what inspired me to write about Lund was this drawing of the North tympanum. Who is that in the middle? 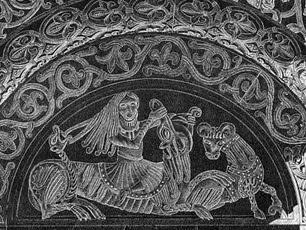 The first thing that occurred to me was Hel (Norse goddess of death and sorcery) and her demon brood. On the other hand it looks like she might be wrestling that dragon instead of nurturing it, and if this were a pagan image on a medieval cathedral, wouldn't the neopagans be all over it? Which they're not, at least not so far as I can discover. 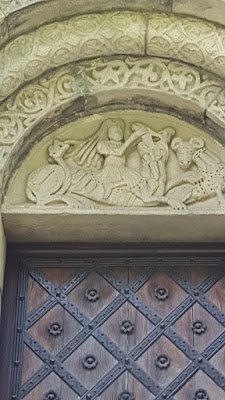 And why can't I find a single discussion of this sculpture online in English or German? A mystery.
Posted by John at 7:36 AM

"Lots of fifteenth-century woodwork on the interior, including this bear."

I... hoo boy. I know that medieval and earlier artwork tends to depict animals in weird, unnaturalistic ways, but I just...

That's not a bear. That's a fat squirrel. It's even chewing on a nut or something like a squirrel does, and seemingly has a bushy tail behind it. Maybe it's supposed to be a bear, but I mean... that's totally a fat squirrel.

Also, if you look at pictures of the whole thing, you find that the "bear" is merely the topmost part of a larger sculpture which features two human figures who are clearly meant to be fixated upon and approaching the "bear", and yet they as humans are much larger than the "bear" is. Why would they totally throw out all sense of scale and proportion in such a way?

Norway doesn't have small bears. There aren't black bears in Norway. They only have brown bears, a.k.a grizzly bears. So unless this is supposed to be a baby brown bear, it doesn't make sense for it to be so astoundingly small in reference to the human figures it is clearly intended to be compared to.

Now, maybe it's not a squirrel either. Norwegian squirrels have historically been the red squirrel species, which is pretty lean and often has ears with funny little fur tufts that are lacking here. If a baby bear seems unlikely, then a fat squirrel must arguably be similarly unlikely. But at least the proportions, body posture, and apparent TAIL make much more sense for a squirrel.

That said, the only other mammal native to Norway that might fit the bill is the eurasian beaver, and the likeness to a beaver is... well... wanting. But at least a beaver would be the right size, unlike a bear, and the tail still makes sense on a beaver, unlike a bear.

One other possibility does come to mind - perhaps a foreign animal. Suppose the notion of Varangian Guardsmen visiting Constantinople is accurate... would they not also have visited the Holy Land, while they were in the region? And might they not have seen various Levantine species?

I find myself wondering if this is perhaps a depiction of a rock hyrax - a species that was commonly known to the Biblical world, but is chiefly unknown to most of us in the west, so much so that English versions of the Bible tend to translate it as "hare", although it is very much not at all the same creature. Hyraxes are kinda funny looking, but the proportions match the sculpture's in many regards, and their unfamiliarity to visiting Norwegians could explain some of the mismatched details.

This is in portuguese, if you don´t find a decent translator I can help:

@Mário - Nice post. Did you see anything about the strange north tympanum?