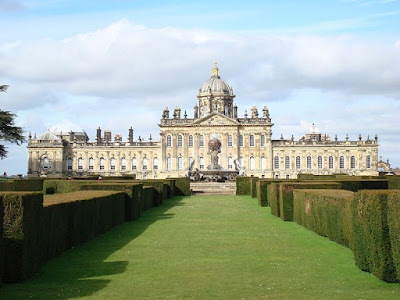 Behold Howard Castle, a great Baroque mansion in Yorkshire mainly built between 1699-1712 for the 3rd Earl of Carlisle, following a design by Sir John Vanbrugh. 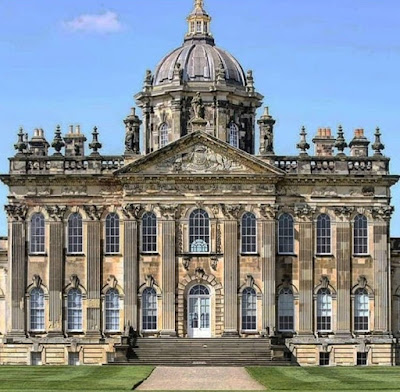 The Howards were one of England's great families, long the Dukes of Norfolk. This was a cadet branch but still wealthy and prominent. The Howards had amassed their vast estates largely through clever marriages. This particular site, a ruined piled called Henderskelfe Castle, came into the family  in 1566 through the marriage of Thomas, 4th Duke of Norfolk to Elizabeth Leyburne, widow of Thomas, 4th Baron Dacre. 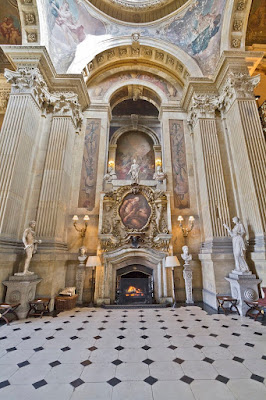 That still doesn't really explain this extraordinary house, though, so I went searching for the source of the 3rd Earl's cash. I believe I found it in wikipedia's account of his political career:

All of these offices came with large salaries, large opportunities to charge for favors, or both, and a career like this could make a man very wealthy indeed. 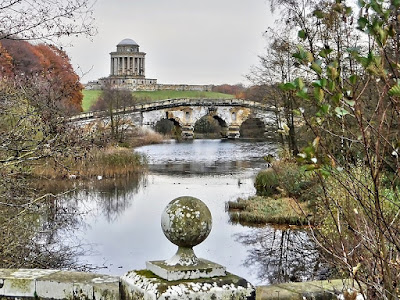 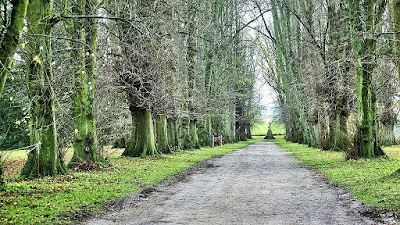 The house is surrounded by enormous "gardens," but these are not the kind of gardens that have lots of pretty flowers. This is a designed landscape focused on vistas, allees, sculpture and geometry. The property amounted to around 13,000 acres and included five whole villages; from 1845 to the 1950s it had its own railway station. 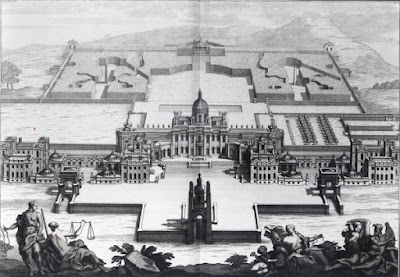 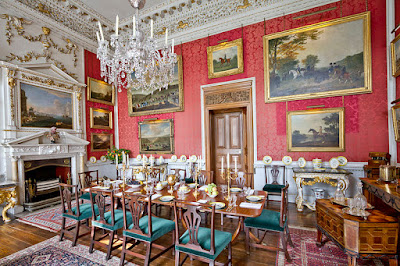 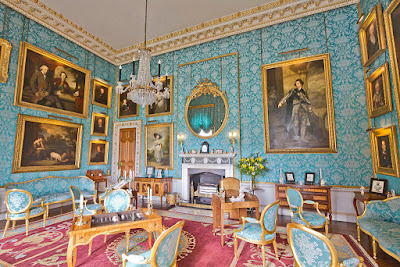 Interior views. Of course the interiors have been much modified over the centuries, but I think they still retain much of their flavor at least. Which makes me ask: how did anyone live in a house like this? Sure, the vast echoing halls were for entertaining guests and intimidating supplicants, and much of the actual living was done in smaller apartments in the wings. But still; was there in this whole house anywhere comfortable to sit? 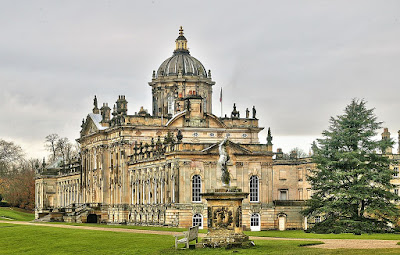 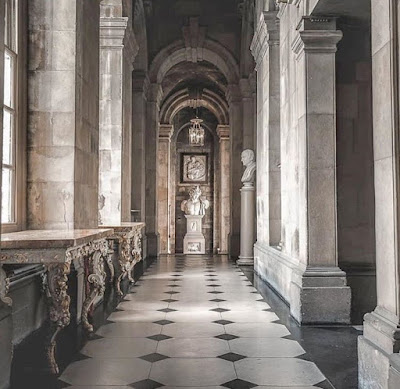 I am a post-Victorian bourgeois sort of fellow, which means that to me "home" means domesticity and comfort. Part of the reason I decided to post about Howard Castle was to explore a radically different idea of housing, and also a radically different idea of what money is for. For us, money is mainly for purchasing ease, comfort, and amusement; for people like the Howards it was mainly for purchasing status and converting that status into power. And that power into more money, and so on. 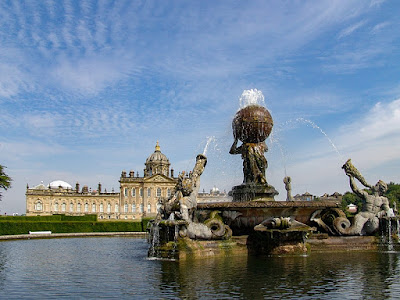 Would this be a pleasant place to live? Who cares! It was a very suitable power base for playing politics at the highest level. It is worth noting that the designer, Sir John Vanbrugh, was not an architect but a playwright and designer of theater sets. He had to call in an actual architect, Nicholas Hawksmoor, to make sure everything would stand up, but the basic conception is scenery not living space. 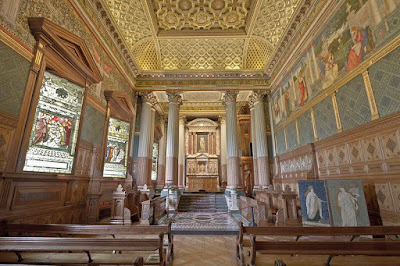 The chapel. I mean, you wouldn't expect the Earl and Countess to traipse every Sunday off to Coneysthorpe or Slingsby and attend services with a bunch of peasants? 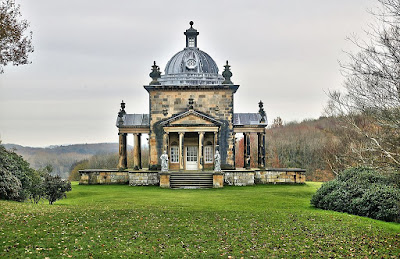 One of the follies, the Temple of the Four Winds. Here we see the perfect expression of the architectural theory at work here. What, you ask, is the function of this building? Why, to remind visitors that you can afford to spend a hundred times what some shopkeeper's house cost on a building with no use at all beyond serving as a focal point for various vistas. 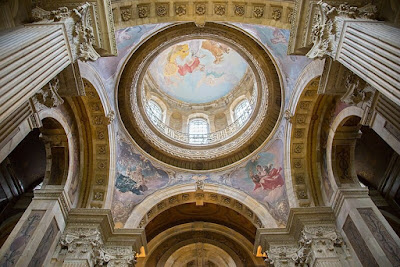 This is politics, not home life. Or rather, for people like the Howards, there was no distinction. 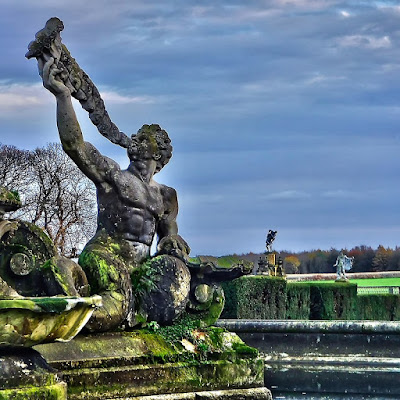 "One of the follies, the Temple of the Four Winds. Here we see the perfect expression of the architectural theory at work here. What, you ask, is the function of this building? Why, to remind visitors that you can afford to spend a hundred times what some shopkeeper's house cost on a building with no use at all beyond serving as a focal point for various vistas."

And this is why I sometimes get the urge to see these sorts of temples to avarice burned to the ground. Every aristocrat just another tsar putting gold on their bread while the common folk toiled and starved, comforted by lies about King and Country and God, and the nobility of purpose that was their enslavement and exploitation.

Think what sort of incredible effect Howard might have had on the local community and economy by instead building one hundred good and worthy houses and giving them away to one hundred deserving shopkeepers and their families. But no - I'm sure the three or four charming vistas that none of those hundred families ever got to look upon were the far superior investment.

Look at Newport. Or look at Whitemarsh Hall -- or rather look at images, since the Hall has been gone for decades.

The excess of wealth is not reserved for nobility.

You can call it something different, and you can parcel it out by methods other than feudal inheritance, but 'nobility' still exists today the same as it ever has.

The rich are still aristocrats, even without us calling them that. It is the excess of wealth that has always defined nobility. From the very dawn of civilization, the people who controlled the most resources became kings, because they could feed and pay others to serve them as soldiers, and enforce their will on those with less.