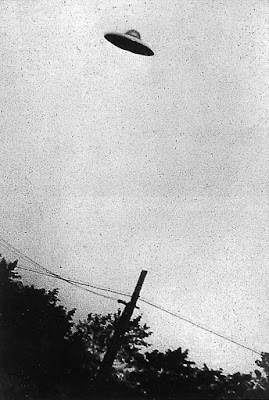 One of the odd facts hanging out there in the world, defying explanation, is how often fighter pilots report encounters with bizarre aircraft. This has been going on for decades; the whole "flying saucers" thing got started from a pilot report of 1947. This is back in the news now because the US Navy has issued new guidelines on how pilots are supposed to report these encounters, presumably because they have gotten a lot of reports:


The strange objects, one of them like a spinning top moving against the wind, appeared almost daily from the summer of 2014 to March 2015, high in the skies over the East Coast. Navy pilots reported to their superiors that the objects had no visible engine or infrared exhaust plumes, but that they could reach 30,000 feet and hypersonic speeds.

“These things would be out there all day,” said Lt. Ryan Graves, an F/A-18 Super Hornet pilot who has been with the Navy for 10 years, and who reported his sightings to the Pentagon and Congress. “Keeping an aircraft in the air requires a significant amount of energy. With the speeds we observed, 12 hours in the air is 11 hours longer than we’d expect.”

In late 2014, a Super Hornet pilot had a near collision with one of the objects, and an official mishap report was filed. Some of the incidents were videotaped, including one taken by a plane’s camera in early 2015 that shows an object zooming over the ocean waves as pilots question what they are watching.

The Times has video, if you are curious. One of the experts the Times consulted said that these may be artifacts of the imaging process, which some of them may be, but on the other hand some are reported based on visual identifications. Some of the pilots have speculated that they were seeing top secret drones, but given how some of these fly (stopping in the air, reversing, etc.) that seems unlikely.

Beats me what's going on. I just post this to remind everyone that the world is very strange, and full of things we do not understand.
Posted by John at 8:49 AM