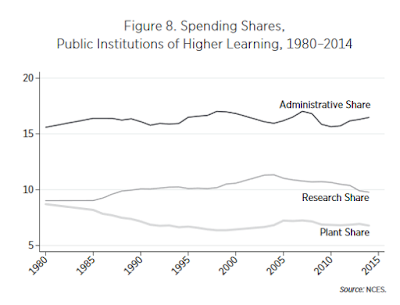 Alex Tabarrok and Eric Helland take on the question of why education costs keep rising:


The most popular explanation why the cost of education has increased is bloat. Elizabeth Warren and Chris Christie, for example, have both blamed climbing walls and lazy rivers for higher tuition costs. Paul Campos argues that the real reason college costs are growing is “the constant expansion of university administration.” Redundant administrators are also commonly blamed for rising public school costs.

The bloat theory is superficially plausible. The lazy rivers do exist! But the bloat theory requires longer and lazier rivers every year, which is less plausible. It’s also peculiar that the cost of education is rising in both lower and higher education and in public and private colleges despite very different competitive structures. Indeed, it’s suspicious that in higher education bloat is often blamed on competition–the “amenities arms race“–while in lower education bloat is often blamed on lack of competition! An all-purpose theory doesn’t explain much.

More importantly, the data reject the bloat theory. Figure 8 shows spending shares in higher education. Contrary to the bloat theory, the administrative share of spending has not increased much in over thirty years. The research share, where you might expect to find higher lab costs, has fluctuated a little but also hasn’t risen much. The plant share which is where you might expect to find lazy rivers has even gone down a little, at least compared to the early 1980s.

In other words there is some increase in administrative costs, but they are rising at the same rate as the cost of instruction and remain a small part of the overall picture. 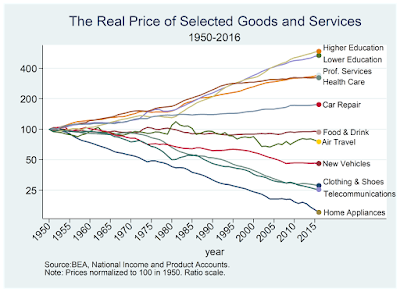 The only explanation for which they find evidence is Baumol's Cost Disease, a theory that says as most of the economy becomes more labor efficient, costs in areas where labor does not become more efficient rise exponentially. Since education is done at the same ratio of teachers to students, the cost goes up every year.

I find this significant because Tabarrok at least is a libertarian prone to blaming bureaucracy for everything, so if he find that administrative bloat can't explanation rising college costs, I tend to believe him.
Posted by John at 8:07 AM

Interesting. It seems to suggest that the default position of the economy is that all costs keep rising, *except* where labor is made more efficient.

An obvious question is what does making labor more efficient mean? Does it mean hiring fewer to people to do more for longer hours and less reward, with no job security? Does it mean some combination of that and automation? Or is all that just my liberal bias talking?

I am intrigued by the idea that the default human social position may be continually rising costs. If it is, I wonder why that would be. And would that explain something deep about the rise and fall of civilizations (or a Chinese-like rhythm of rise, crisis, decline, revival, over and over)?

Interesting enough for me, anyway, that I'm willing to teach the AI how to better recognize crosswalks in order to make the comment.

In 1992 I saw a college lower the number of classes, per professor, per semester, from 5 to 4. Few years later from 4 to 3. During that time they also lowered the number of years between paid sabbaticals. Also, the campus was ‘beautified’ and several new building were built, not all paid for by donations. This is a college with 1000 students. They had to do these things to attract qualified professors and to stay up with their peer colleges. Tuition increases came due to these pressures.

We have gotten richer over the past 250 years because labor has become more efficient: more wheat grown or widgets made per person-hour. Or four actors delivering a play to 500,000 people at once over television. Or one man driving a big machine that digs as much as a thousand men with shovels. Economic growth essential means labor becomes more efficient. As labor becomes more efficient, salaries can rise; that is the basic economic fact underlying the modern world.

Anything that cannot be made more efficient essentially remains medieval. Theoretically, people whose work is done in a medieval way (e.g., teachers) ought to be as poor as medieval people. But we want them to be full-fledged members of our society, so we spend a lot of money to make up for their inefficiency. And the faster the rest of the economy is growing, the faster costs in person-to-person fields will rise.

But prices and costs also rose in medieval conditions--not as rapidly, but there was a steady rise. And yes, I'm sure one could find specific causes for specific rises. But I'm wondering if there isn't something deeper at work. I guess my hypothesis would be that what a significant portion of people want out their work is social status maintenance and security against risk--and that there's something about keeping those things going that may eventuate in increasing costs--more or less slow or rapid depending upon circumstantial factors.

One could also suggest that the problem with increasing health and education costs is that those cost rises are depriving precisely those who are losing in the modern capitalist efficiency equation, elsewhere in the economy.