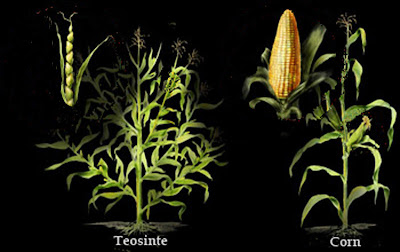 Botanists and archaeologists have been searching for the wild ancestor of corn for a century. The close resemblance between corn and a Mexican grass called teosinte was observed by botanist George Beadle in the 1930s, and Beadle went on to show that cross breeds of corn and teosinte are fertile. The problem is that corn and teosinte are very different in a lot of basic ways, as you can see from looking at the pictures. In teosinte, the female ears develop on long side stalks, rather than on the central stalk, and there are several male flowers per plant instead of just one.

Modern genetics has confirmed that Beadle was right, and corn and teosinte are the same species. Only a handful of genetic changes separate the two plants, and it is a mutation in one regulatory gene that creates the different shapes. This must have happened around 9000 years ago, when the plant was first domesticated, since there is no archaeological record of domesticated teosinte. What a strange and key event it was, since corn was the basis of all the native civilizations of Central and North America.
Posted by John at 8:10 AM