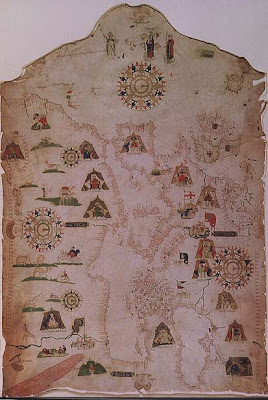 The Library of Congress is hosting a conference on portolan maps. These maps, the oldest of which date to the 13th century, are based on straight line sailing distances between ports. Nobody knows much about how they were made, although they obviously depended on compass readings. By the 16th century, when the map above was made by Mateo Prunes, they had become reasonably accurate for the Mediterranean and the Black Sea. But the method could not cope with the curvature of the earth across oceanic distances, so these maps were abandoned in favor of projections based on latitude and longitude, like the method of Mercator. People have tried to show that portolans were based on ancient Roman or even Phoenician traditions, but there is no evidence of this, and it seems they were Medieval invention. The detail below shows the method better. 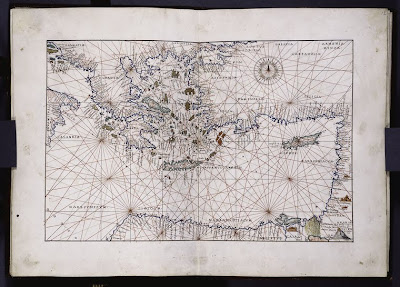