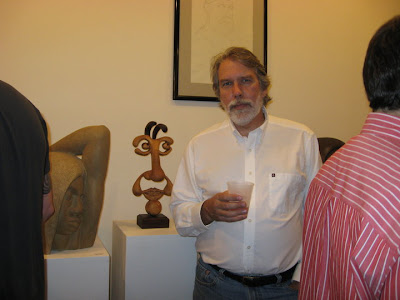 I went to an art gallery event Thursday night. My wife's girlhood friend Ellen's husband, Jim Hendricks, is a sculptor. He supports himself as a carpenter but he used to do a lot of wood and stone carving. I hadn't heard much about his sculpting in the past decade, and some of the pieces he showed are fifteen years old. But there were also some new works, so I guess he is getting back to doing more carving, and showing his stuff. Which I think is great. We'll have to get together soon and compare notes on throwing oneself back into art as the fiftieth birthday looms. In the picture I am standing in front of Jim's stuff.

Gallery 788 is in the Baltimore neighborhood once known as Pigtown but now rebranding itself as Washington Village. It's the cutting edge of gentrification, with a gleaming new coffee bar next door to an African hair weaving salon. Most of the gallery crowd was hip-looking people in their 20s or early 30s, but with a fair sprinkling of grownups. The music was a nonstop pulsing beat like you might use to dance yourself into a shamanistic trance. They were pouring a microbrew called Raven and selling glasses with a picture of Edgar Allen Poe. Seven or eight artists were represented, but most of the art was unremarkable. I liked some of Jim's pieces, especially one of the new works, a rough cut wooden mummy titled "Lazarus." There were also two striking works of the painted photograph variety, with snapshots painted over in start black and white pasted on roiling gray canvases. Nothing I would hang on my wall, but they were at least interesting. The paintings looked like they came from an undergraduate show, and the photographs were mostly forgettable. There was one series of half a dozen nude shots of a really gorgeous woman, and I thought, this guy may not be a great artist, but at least he has a really hot girlfriend.

It was great to get out and see what was happening in the non-suburban part of the world.
Posted by John at 9:00 PM