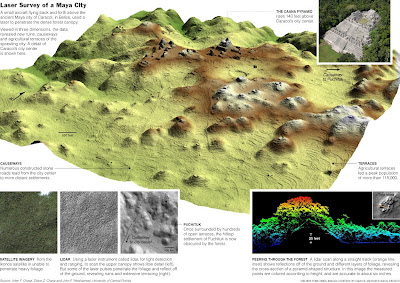 Nice article in the NY Times on the Lidar mapping of a Mayan City (click on the image to enlarge). Lidar stands for "Light Detection and Ranging," just like radar stands for "Radio detection and ranging." I have found Lidar, used from an airplane, to be an amazing technology for making topographic maps.

Until Lidar came along a decade or so ago, maps were getting worse and worse. It was considered too expensive to send out guys with transits to make topographic maps, so we had a generation of maps (made between about 1970 and 2000) based on various kinds of aerial or satellite photography. They all stink. I used many maps made by surveying companies for property developers that missed pits and mounds bigger than houses. Even the latest USGS paper maps of the Washington area are less accurate than those made in the 1890s by guys who actually walked around and measured things. The first generation of GIS (digital mapping) made things worse, because sloppy data from aerial photos was combined with other sloppy data sets by people who were just learning the software, resulting in maps where streams run uphill and nothing shows up exactly where it is supposed to be. I spent months of my life working with GIS guys trying to get something from their data that showed what I wanted to show, and in the end I was left wondering whether any of the various maps we generated was really right.

But now the combination of Lidar with more accurate GPS mapping and more advanced GIS software allows us to create amazingly accurate maps at a reasonable cost. I look forward to the day when the entire US has been mapped using Lidar and I will no longer have to curse inadequate maps every time I try to do an archaeological survey.
Posted by John at 8:36 AM