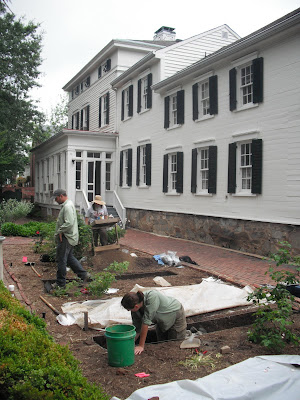 My latest project is in the garden of the Lee-Fendall House in Alexandria, Virginia. This lovely house was built in 1785, when this was the undeveloped outskirts of the town. The builder was Philip Fendall, a cousin of Light Horse Harry Lee, and various other Lees and close relations lived in the house until the 1903. George Washington was a regular guest in his time, Robert E. Lee in his. In the 1850s the house was remodeled by a wealthy Alexandria merchant who had married into the Lee family, giving it the Greek Revival appearance it has today. From 1937 to 1969, in one of those weird historical connections that seem significant in a way you can't put your finger on, the house belonged to John L. Lewis, President of the United Mine Workers.

The house is furnished to the 1850 to 1870 period, and the foundation that owns it would like to know what the garden looked like at that time. So we are spending three weeks digging in the garden to find out what we can. Mostly we are excavating long, narrow trenches like the one below. We are hoping to find paths, planting beds, other garden features, and buildings, including a greenhouse mentioned in an 1854 advertisement. 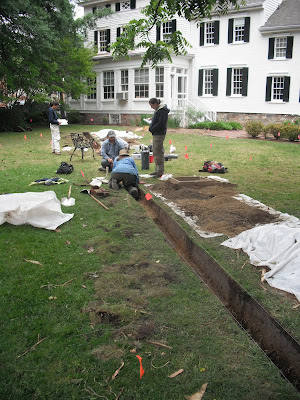 Our first discovery was that across most of the yard the original topsoil is buried under about a foot and a half of fill -- soil brought from somewhere else. The fill looks very like the natural soil of the site, so it presumably came from nearby. Your first assumption when you find a lot of fill spread around an old house is that it came from digging the cellar and the well, so you imagine it dates to the time the house was built. But this fill contains artifacts dating (we think) to the mid 1800s. The deep trench in the picture below cut through the fill to the natural topsoil buried beneath it, and that soil contained a lot of artifacts dating to around 1800, like the broken coffee cup in the next picture. Since nobody lived around here in 1785 when the house was built, that means these artifacts, sealed beneath the fill, were thrown away by the Fendalls, confirming our suspicion that the fill dates to later. 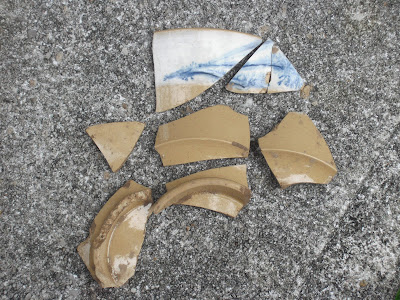 We haven't yet pinned down the date of the fill, but we think it must have been put down around the time the house was remodeled, in the early 1850s. That was the only time we know of that a lot of money was invested in the house. Perhaps the soil came from a nearby lot, from the cellar of one of the neighboring houses. The long trench we dug across the lawn (above) didn't show any planting beds or really much of anything, so we think this area was always a lawn. The only planting beds we have found so far are in the trenches we dug near the kitchen (top photo), so there were likely vegetables or herbs being grown in that part of the yard. In one of those same trenches we found brick rubble underneath the planting bed, and that is another important clue. (That's what our field supervisor Jason is troweling up in the picture below.) We have a 1796 insurance map that shows a bunch of outbuildings in the yard, but these were gone by 1854. So we think that around the time the house was remodeled, the yard was transformed from a busy work area, with many buildings, to something quieter and more genteel. The buildings were knocked down and their foundations leveled, and fill was spread across the yard to hide the remnants and help get the plants started. Trees were planted, the lawn was established, and garden beds were laid out in front of the kitchen and probably around the edges of the yard as well. 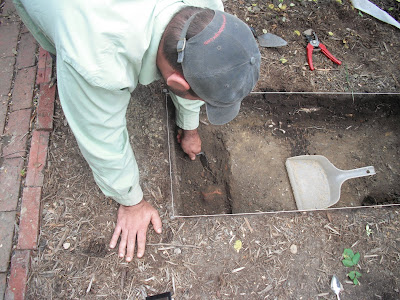 We still have more than a week of fieldwork yet to go, so our thinking about all of this may change. And the fieldwork will just be the first step. We will take all of the artifacts we find to the lab for more analysis and (we hope) more accurate dating. We have soil sample we will send to our botanist for flotation, to search for seeds or other plant remains, and other sample we will have analyzed for pollen. By the end of the project we expect to have learned a lot about the Lee-Fendall garden.
Posted by John at 7:13 PM

I took a look at the artifacts last night, reassembled the broken vessel in the picture and discovered that it is actually a nineteenth century stoneware bowl.