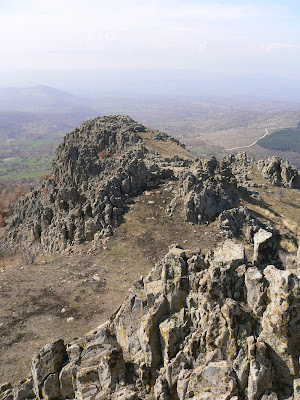 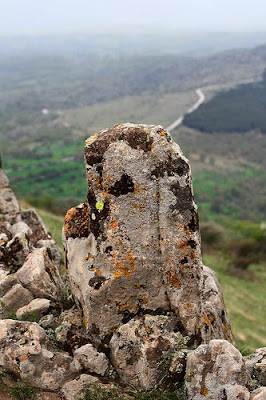 I just learned today about the megalithic observatory at Kokino in Macedonia, discovered in 2001. The site consists of a rock outcrop on top of an old volcano that was modified by the construction of platforms and the erection of menhirs with notches in their tops that mark the positions of important celestial events. The site has been dated by potsherds found in the platform areas to around 2000 to 1800 BC. The upper photo is very large and you can click on it for a better view of the site.

I can't find much out about the site, but I imagine it is controversial with hard-headed, scientific types. The rock of the mountain fractures naturally into rectangular shapes, and both the stones of the platforms and the menhirs are unaltered natural rocks. So an enthusiast could easily imagine lots of constructions that a skeptic would dismiss as natural rock piles. The Macedonians have applied to UNESCO for World Heritage Site status, and their application includes some rather speculative stuff:

All crucial features of the ancient observatory are situated at two platforms, an upper and a lower one, at an elevation difference of 19m. The shapes of four stone seats ("thrones") placed in a row dominate the lower, western side. They are oriented in the direction north-south, thus enabling the one seating on the throne to observe the apparitions on the upper platform, while the tops of the rocks had the role of an eastern horizon. According to the archaeo-astronomical analysis, the main role of the thrones was the performing of the bonding ritual of the Sun God with his "representative" on Earth - the ruler, who sat on one of the thrones (the second one) during the ritual. A testimony for that is the distinct stone block with a separate marker cutting on its top, placed right under the highest elevation of the site. The ritual was performed in mid-summer (today in the last day of July) when the Sun rises exactly in the opening of the stone marker. The marker cutting was made with great precision, in such a way that the distance of its external vertical sides fully corresponds with the diameter of the Sun, when observed from the second throne.

This photograph is titled "thrones", and these rocks look pretty natural to me: 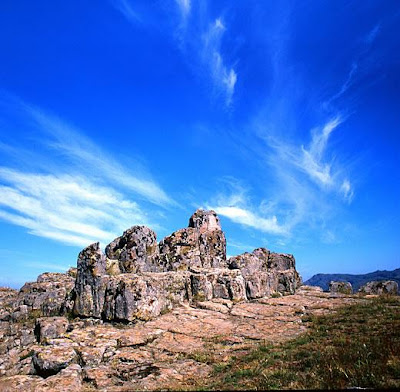 And as you can see from this photograph, a lot of the points that are said to have been used for solar, stellar, and lunar observations are natural cracks in the rock: 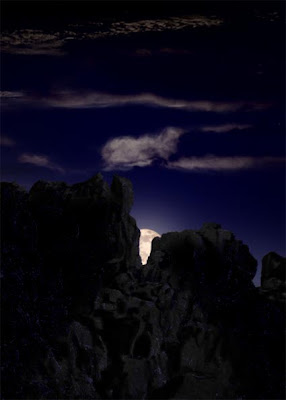 But the presence of Bronze Age pottery on a remote mountaintop implies a ceremonial site of some kind, and the standing rock in the second picture above certainly looks like a megalith. And, honestly, my image of Bronze Age Europeans is that they would be more impressed by a site where you could sit on natural thrones and observe important sunrises or moonrises through natural rock clefts than by an observatory they had to build themselves. So whatever the details, this strikes me as a fascinating site.
Posted by John at 7:21 AM