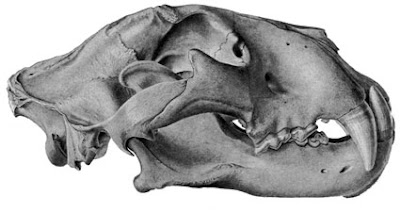 Panthera atrox, the "American lion," was one of the biggest cats ever. Some of the specimens from the La Brea Tar Pits are thought to have weighed more than 750 pounds. This big kitty has been placed on several branches of the carnivore family tree. The latest study, based on careful study of the skull, says the "lion" was a giant jaguar.

It strikes me as pretty bold to issue this kind of ruling now, because in a decade or less somebody will extract DNA from the bones and figure this out in a more definitive way.
Posted by John at 7:09 PM