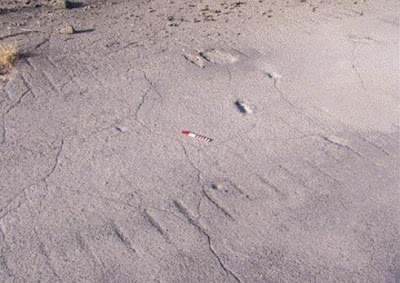 Back in 2003, archaeologists working in Mexico reported what they said were human footprints in volcanic ash that they dated to 40,000 years old. Since the oldest accepted evidence for a human presence in the Americas is only 13,500 years old, that created something of a stir. Not everybody believed the Mexican evidence, though. The depressions look a little like footprints, but not in any detail -- for example, they lack any sort of left-right alternation. The site is an active quarry (above), and some people thought the "footprints" were just some kind of weird marks left by modern mcahinery. Then somebody else dated the volcanic ash, using a different technique, and came up with a date of 1.3 million years old.

Papers and accusations flew back and forth. But, what do you know, the original discoverers of the footprints replicated the radioactive Argon dating done by their critics and got the same result, and now they have conceded that they were wrong. It is so hard for people who have invested years of work in a finding to admit this that I think we ought to heap praise on every scientist who publicly recants. So here's to Silvia Gonzales and her colleagues, who put the truth above their own egos.
Posted by John at 7:23 AM

Most of what you see in the photo are caterpillar tread marks. The rounded blobby things are the "footprints."