It Would Be Easier if She Were Gay 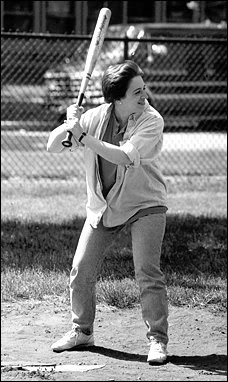 Actually, the all-too-public discussion about the ought-to-be private topic of Elena Kagan's sexuality would be easier if the Supreme Court nominee were gay. . . .

There are gender-based undertones to the Kagan discussion, but it is more complicated than simple sexism: that we assume an unmarried woman in her 40s or 50s "must be" a lesbian. Truth is, there is much the same gossip about unmarried and never-married men in public life. Imagine a David Souter nomination in the era of unrestrained blogging. Speculation about the meaning of his bachelor status would have been rampant -- and online.

But, honestly, if she isn't a lesbian, why does she wear her hair like that?
Posted by John at 7:03 AM

What does that last comment mean? I have a happily married friend with two children who has exactly the same haircut.

No, I don't think it's flattering on her, but I would certainly never say that.

For what it's worth--this friend is also a lawyer. In the UK.

Are you being ironic or something and I'm just missing it?

I think people think she is a Lesbian because she looks like one. She sets off people's gaydar. There have been gay activists calling for her to come out of the closet. There is some kind of signaling confusion.

Its funny this morning my husband and I spent some time trying to figure out (from coverage in the Times) that someone had mysteriously connected the dots: Female-Unmarried -Softball -Lesbian. After we finished sharing our disbelief at this constellation of unrelated facts that apparently mean something to other people, my husband said "but she sure is ugly." I was astonished. Dan never comments on anyone's appearance. I hadn't even noticed what she looked like.
So perhaps its the double standard for female "lookism", hiding as gay-bashing.