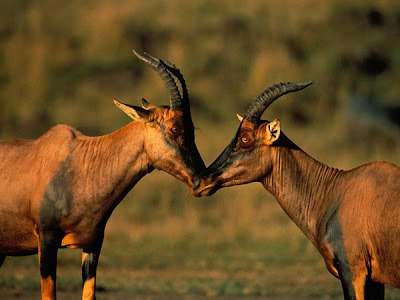 During mating season, male topi antelope trick females with false alarms of nearby danger to boost chances for sex, a new study says. If a female starts wandering out of a male's territory, the male will begin snorting and staring, ears pricked, at nonexistent predators.

"The female will be walking away, and the male runs in front, looks not at the female but where she's going, makes this snort, and she typically stops," said lead researcher Jakob Bro-Jørgensen of the University of Liverpool. The researcher, who observed the topi's tricky behavior in Kenya's Masai Mara National Reserve, noted that the males issue fake warnings only when the wandering females are in heat.

I always suspected that for warriors to increase their power by playing up fake threats was one of the oldest political tricks, but I never knew how old.
Posted by John at 9:33 AM