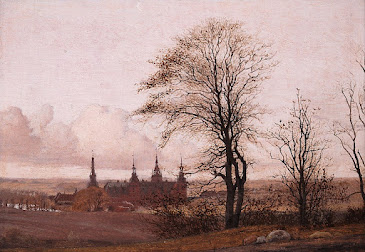 Christen Schiellerup Købke (1810 – 1848) was a Danish painter from the Romantic era, when Danish and Norwegian art surged back into the European mainstream. People often describe Danish art of this period as "nationalist," which in a sense it was, since people were into painting typical Danish scenes and exploring Danish history and folklore. But on the other hand the impulse for that kind of nationalism came from Germany; Danish painting of what some call their "Golden Age" was very much inspired by German Romanticism. One of the top products of Copenhagen's new Royal Academy of Art was the Norwegian Johan Cristian Dahl, who ended up as a professor in Dresden. 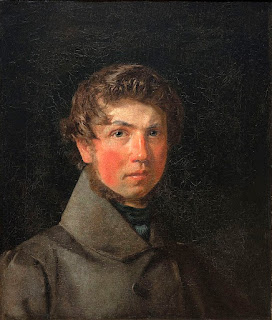 Like Dahl, Cristen Købke was born in humble circumstances, one of eleven children of a baker. But the enormous economic expansion of Europe in the nineteenth century lifted millions into the middle class, including Købke. 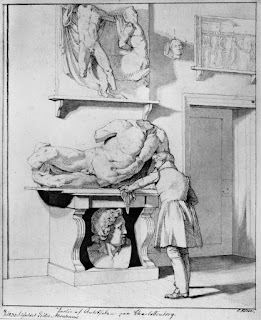 He later said that he learned to draw while recovering from a bout of rheumatic fever that left him housebound for months. His portfolio so impressed the teachers at the Royal Academy that they admitted him at the age of 12. I believe the sketch above is from his student days, showing a visitor to the collection of antiquities in Charlotteberg Castle. 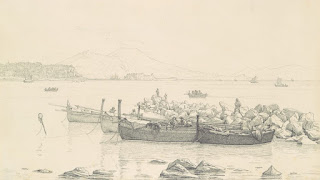 He was able to support himself as a painter but had no great success. In 1838 he managed to wrangle the money for a trip to Italy, like so many other painters of that era, but his Italian works were (wikipedia says) "uninspired" and didn't sell. This sketch of the Bay of Naples harbor is nice, though. Not able to sell many paintings he worked for a while as a decorator, before dying of pneumonia at the age of 38. 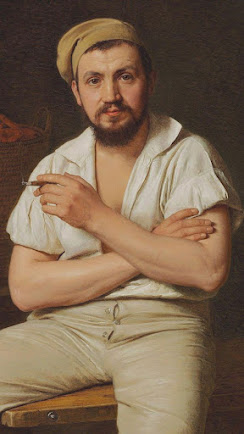 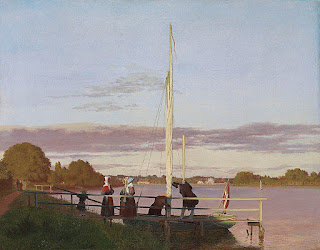 View of Østerbro from Dosseringen, 1838
His Danish works come in two distinctly different color palettes. There are the sunshine works, like this, which do nothing for me. 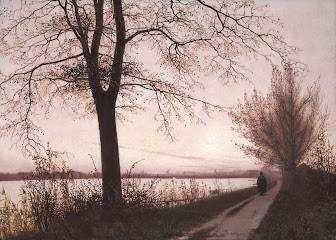 Autumn Morning on Lake Sortedam, 1838
And then these, which to me perfectly capture the feel of a gray, drizzly Autumn day. Sometimes I feel like I inhabit this kind of light. 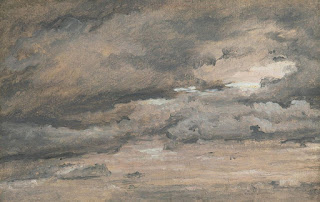 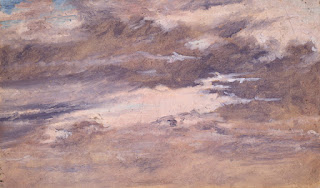 Købke had a thing for clouds. Besides the castle image at the top the works of his you are most likely to see online are cloud studies. Cristie's sold one of these a few years ago for more than a million pounds. 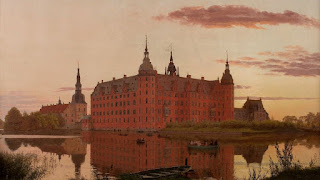 Part of the impulse behind abstract painting in the twentieth century, and especially Abstract Expressionism, was to invoke feelings and states of mind without painting any particular scene. To strip away the details and touch the essence. Sometimes it works with me, but very rarely does it work as well as a scene of a real place at a certain a time of year and time of day. Købke's Autumn scenes do that for me.
Posted by John at 9:40 AM