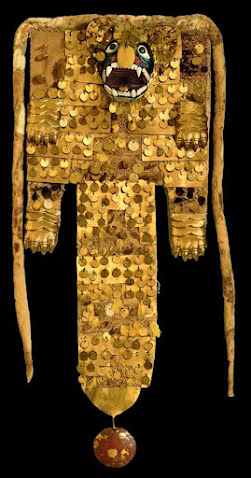 Medieval cats. You may have heard that they were considered demonic or witchly, but really almost all of our depictions show them as pets or mouse-hunters.

Cut marks on 300,000-year-old bear bones suggest that Neanderthals skinned this bear to use its pelt for warmth.

The global supply chain mess, which was at its peak between October and December 2021, has resolved itself and we are back to a normal level of backlogs and delays.

The role of zero-sum thinking in American politics, confused essay but the topic is interesting to think about. For example, black Americans are more likely to believe that one person's gain is another's loss than white Americans.

In the NY Times, yet another call for the federal government to save rural America, for which we need a "policy renaissance", a "coherent federal rural policy," and "bold policy ideas." What those ideas might be, sorry, no clue. The notion that the government could somehow save all the fading towns in rural America is simply absurd. As the article notes, construction of a prison near one Pennesylvania town did nothing to reverse its decline.

Last week's blizzard dropped 43 inches of snow on Buffalo and has killed at least 27 people; the city experienced blizzard conditions for 37 hours straight, which may be a record, although nobody seems to have kept tract of that statistic.

The origin of Chicken Tikka Masala is disputed, although everyone agrees that it originated in Britain sometime between 1960 and 1980. One of the claimants to the creation was Pakistani chef Ali Ahmed Aslam, who ran a restaurant in Glasgow; he died this week.

How a community of Nubians brought to Uganda as mercenaries eventually became Ugandans.

And a cool color illusion.

Houses on Lake Erie iced in after holiday blizzard.

Summary of the military situation after ten months: "All other factors remaining constant, the Russian military will struggle to recover offensive potential."

Russian blogger has some thoughts on artillery shell usage. And a video in which Wagner mercenaries complain that they have no ammunition, along with obscene abuse of the Ministry of Defense.

In a long post, Russian fighter Topaz says most of the mobilized soldiers are useless and the ammunition shortage is becoming critical.

Stories told by captured Russian soldiers about miserable conditions in the Russian Army.

Last week Putin raised the prospect of a negotiated peace in Ukraine, but then Lavrov made it clear that "negotiations" means Ukraine must accept Russia's territorial gains and demilitarize, or else "The issue will be decided by the Russian Army."

And Dmitry Medvedev's list of "predictions" for 2023. A lot of Russians seem to spend their time fantasizing about the collape of the West.