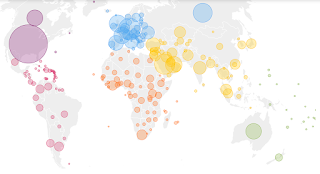 Circles represent the number of migrants in each country, from UN data

Reading a NY Times story about the latest exodus from Cuba – 250,000 have left over the past year, more than 2% of the population – I got to wondering about the scale of worldwide migration. It seemed to me that it has gone up a lot lately, but I wanted to check the numbers.

Well, the basic picture looks like this: in 1990, 151 million people lived in a country other than the one they were born in, 2.9% of the world's population; in 2020, 281 million did, 3.6%. Continuing with 2020 numbers, there were 87 million migrants in Europe, 86 million in Asia, and 59 million in North America. Migrants made up 16% of the population in North America and 12% in Europe. The number of migrants was growing fastest in Asia. Remittances sent home by migrants totalled $702 billion.

There is a graphic here that allows you to trace flows between source and destination nations. Incidentally you will note that numbers on migration don't always add up very well, because it is hard to count migrants and there are different ways of counting foreign born students, guest workers, refugees, and so on. I'm just passing on official figures.

In the US, there were 2.8 million people from Mexico, 2.7 million from India, 2.2 million from China, and 2.1 million from the Philippines; the total foreign born population was around 45 million, 14%.

Meanwhile the UN estimates that 7 million people have fled from Venezuela, 23% of the population; 6.8 million have fled Syria, or 32%; 5.9 million have fled Afghanistan, or 15%. The largest migrant population comes from India at 18 million, but that's only 1.2% of India's population. (Meanwhile 2.5 million people from Bangladesh live in India, along with over a million from Afghanistan. Russia is another country with major migrant flows both in and out: out to western Europe, in from central Asia.)

The world is in the midst of three great demographic events: a population explosion, from 5 billion in 1987 to 8 billion today; falling birth rates in most of the world, down to replacement or below; and migrant flows from poor, violent countries to safe, rich ones. All of this is shaking up global politics. What terrifies many people in western Europe and the US is the confluence of plunging native birth rates with surging migration.

These changes are massive and what they will mean in the long run is unclear to me. Looking toward the future, there are two things that I think cloud any ability of ours to imagine what the world will be like in 2100: the stunning rise of artificial intelligence, and the massive shocks created by rapid demographic change.

What terrifies many people in western Europe and the US is the confluence of plunging native birth rates with surging migration.

In the 1880s, some 1.5 million Germans migrated to America - this at a time when America's population was between 50 and 60 million people, meaning the new immigrants made up 2.5% - 3% of the total population, and they overwhelmingly settled in the Midwest, dramatically reshaping the course of the region for the next century and beyond.

During the Great Famine of 1845 to 1852, about 1.5 million Irish fled to America - at a time when the country only had about 20 to 25 million residents, with these newcomers representing a full 6% - 7.5% of the total population. Previously, Irish-Americans had chiefly been Protestants, but in the wake of the famine, Irish Catholics flocked to America in droves, redefining the demographics of major cities like New York, Boston, Pittsburgh, Chicago, Philadelphia, etc. Their arrival helped pave the way for America transitioning from a de facto Protestant state, to a more just arrangement in which no one single denomination truly holds a majority of power or sway in government or society.

Around the turn of the 20th century, improvements in both steamships and railroads made travel affordable to people on a level never before known, and somewhere in the neighborhood of 25 million immigrants from all across Europe flocked to America - chiefly Russians, Poles, Greeks, Italians, Hungarians, and even several million Ashkenazi Jews. The US population in 1900 was a bit more than 75 million, and by 1920 had topped 100 millions - meaning these new immigrants comprised at least 25% of the total population of America, if not more.

At every step of the way, these immigrants were fought - belittled, bemoaned, demeaned, dehumanized, lambasted, lynched, and generally made to feel as unwelcome as possible. And yet they stayed, and in so doing they helped build the modern world we all take for granted.

And now, hypocrites that they are, many of the descendants of those historic migration surges turn around and adopt the exact same hateful, selfish rhetoric that was hurled at their ancestors (along with rocks and bricks) in a foolish, futile, short-sighted effort to "preserve America for Americans", and other such petulant, hate-filled bunk.

Immigrants are what made this country prosperous, and spurred on the development of all the greatest virtues of this country. Innocent people, fleeing violence and poverty, starving children in tow - willing to work hard; willing to adapt and change to then needs of a new home country; proud to vote; proud even just to pay their taxes and follow the law; proud both of their ancestry AND of being American...

And this isn't some long forgotten ideal, a dusty old relic to be consigned to the dustbin of history! This is something I remember from my relatively recent childhood, being espoused by people of every political persuasion as the single greatest quality of American culture - nay! - as the foundational bedrock, the very nature itself, of America! How quickly we forget!

The people in America who are terrified by plunging "native" birth rates and surging migration are not just hysterical cowards and colossal hypocrites: they are, quite simply, "Un-American" - an ugly, unwieldy term, I know; but the only one which truly encapsulates the truth and gravity of their deplorable position.

Not like the brazen giant of Greek fame,
With conquering limbs astride from land to land;
Here at our sea-washed, sunset gates shall stand
A mighty woman with a torch, whose flame
Is the imprisoned lightning, and her name
Mother of Exiles. From her beacon-hand
Glows world-wide welcome; her mild eyes command
The air-bridged harbor that twin cities frame.

"Keep, ancient lands, your storied pomp!" cries she
With silent lips. "Give me your tired, your poor,
Your huddled masses yearning to breathe free,
The wretched refuse of your teeming shore.
Send these, the homeless, tempest-tost to me,
I lift my lamp beside the golden door!"

@G- Ok, fine, I'm pro-immigrant. I think the steady influx of Asians and people from the Caribbean and west Africa is one of the best things we have going for us.

But there have always been costs; consider what the exploding white population of the 1800s did to the Indians, with plenty of help from immigrants.

And I think the benefits of immigration depend on keeping the migrant flow to level that can be readily absorbed. Sometimes I worry a little about this, because I can't see any ready limit on the number of people who would like to move to safer, richer places. What if 100 million people moved to the US next year? How could we handle that? How many apartment towers would you support building in your neighborhood for them to live in? What if 100 million Africans suddenly moved to Europe?

I don't think those numbers are beyond the realm of possibility at all. There is a sort of phony discourse around immigration because we don't want to admit that we make getting in traumatic because that limits the number of people who will just get fed up with life where they are and start walking. The book I read about the massive refugee camp for Somalis in Kenya made it clear that if it were easy to get from there to Europe, almost all of them would have gone. What keeps them from trying is the fear of death. How much hospitality are rich nations obliged to offer?

The movement of 3.6% of the world's people has caused a huge amount of political turmoil; imagine what would happen it that number rose to 10%. Which I think it would if rich numbers opened their borders. Heck, it might rise to 25%. How could that be handled?

I think immigration in moderation is a great thing but I think unlimited migration might be a catastrophe.