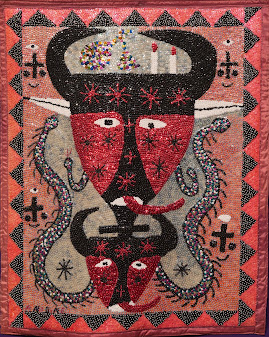 Double Bossou; Bossou Ashadeh is a loa, the spirit of the deceased Dahomean king Tegbessou
Antoine Oleyant (1955-1992) was a famous maker of Drapo Vodou, or Vodou Flags. Like most things about Vodou –Voodoo, Voudon, etc. – the flags have a mixed origin. The form was copied in the 18th century from European flags, but the art style of the oldest surviving pieces clearly comes from Africa. Just where in Africa is disputed, but experts see elements that derive from the Ghana-Benin area and from the Congo. The images mainly represented the Iwa of Haitian religion, which combine the attributes of African gods with those of Christian saints. Modern flags use a lot of sequins, which people say began in the 1940s when some Haitian artists saw a Brazilian carnival troop perform in sequinned costumes. 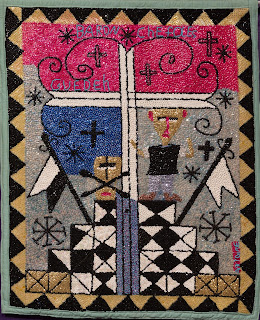 The cross of Baron Samedi
The flags were made to be carried in the processions that are a key part of Vodou rites; these were mainly processions in a circle around the temple or outdoor worship site, not covering much distance, since after all when Vodou arose it was illegal and had to be kept secret. They were supposed to attract the attention and favor of the Iwa. 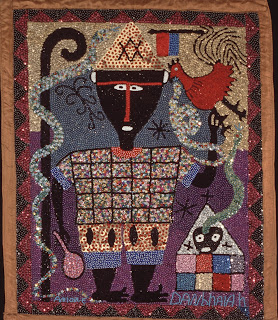 Damballa, one of the great loa, sky father and creator of life; traditionally he was associated with a white serpent, but this image also assimilates him to Jesus the shepherd
In the 1950s, collectors from North America and Europe began taking an interest in the flags and offering to buy them. Haitians responded by making them for sale. These days people say there is a strict division between drapo servis, made for use in rites, and flags made for sale or as works of art. One difference is that drapo servis are always square; another is that art flags have a much wider variety of subjects. But the drapo servis have also evolved in recent decades to use a lot of sequins and to have elaborate borders and so on, so I am skeptical that the division is strictly adhered to. 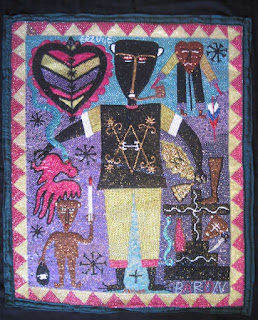 Baron Samedi, Lord of the Dead, Ruler of Cemeteries

Antoine Oleyant was part of a generation of flag makers who tried to elevate the form to an expressive art. He was eventually able to earn a good living from making flags, and these days they sell for up to $10,000. He was born in the mountain village of Plaisance du Sud but moved to Port-au-Prince as a teenager to train as a sculptor. He began making drapo Vodou in the 1980s. 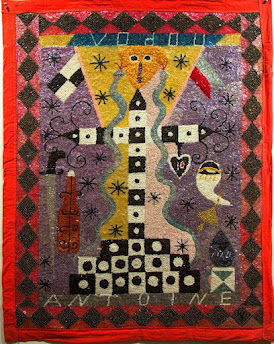 Another Cross of Baron Samedi; this measures 32x43 inches (81x109 cm), which is about standard for these works 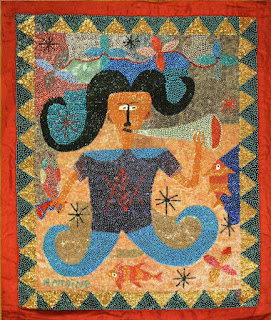