The Oldest Narrative Carving is What? 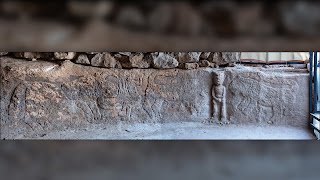 Turkish archaeologist Eylem Özdoğan claims that this 11,000-year-old carving, found near the Euphrates River in southeastern Turkey, is the oldest narrative carving in the world. The relief is carved onto the front of a stone bench in what archaeolgists think is a Neolithic temple. It meaures roughly 2.5 to 3 feet (0.7 to 0.9 meter) tall and 12 feet (3.7 m) long. 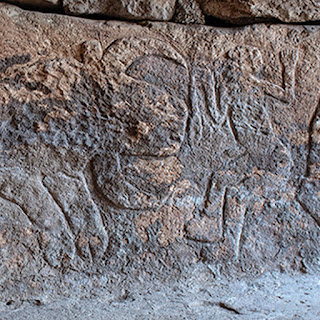 The left-hand section depicts a person being threatened by a bull. He seems to be holding something in his hand, perhaps a rattle or a whip. 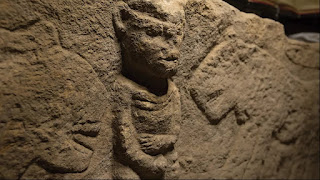 In the right hand section a man surrounded by leopards holds his penis in his hand.

Which is pretty weird and cool. But if this is a narrative, what is the story? The great hero scares off a bull with his shamanic rattle, then terrifies two leopards with his cock? But the leopards don't actually look very scared; maybe he decided that since he was going to be eaten by leopards anyway, he might as well die happy? Or are the bulls and leopards his assistants, helping him do some great act of masucline fertility magic? Is the hero seeding the land? Die he died at the, um, culmination of this act, gored by the Bull of Heaven and devoured by the Goddess's leopards?

I noticed that too. I was kind of disappointed to realize that the initial "lepers" was almost certainly a misprint. Lepers in an image like that would have been intriguing.

I'm curious how one would go about depicting lepers in such an image from that time period.

I've seen a few medieval European depictions of lepers which depicted individuals with lesions, but then had to include text clarifying that it depicted leprosy specifically. I've also seen at least one where it did not specify via text, but depicted both lesions and amputated limbs, which narrows it down a fair deal.

@G - the classical tradition is the same, showing people with spots and sometimes missing limbs. And so far as we know leprosy was unknown in western Asia until the classical period.