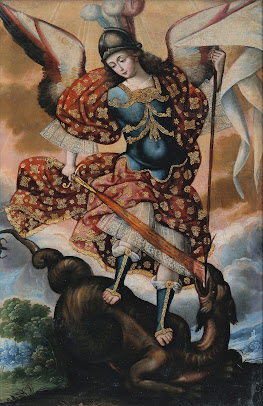 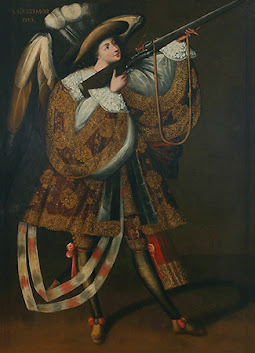 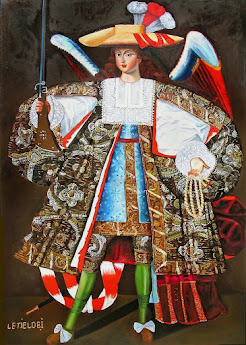 Two more angels by the Master of Calamarca, a Bolivian artist who may have been José López de los Ríos, but if so we still know little of de los Rios beyond his name. All of these angels are in the church of Calamarca and date to around 1700. 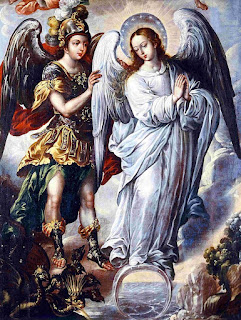 Juan Correa, Virgin of the Apocalypse, c 1689. Incidentally there is no Virgin in the Apocalypse of John, just a "Woman of the Sun" who is pursued by a dragon that wants to eat her child. In medieval and early modern Europe it was widely believed that this was Mary, and the story became a common subject for paintings. So not exactly an angel, although usually painted like one; an orthodox Mary doesn't have wings any more than Jesus would. The imagery of the Virgin of Guadalupe as it developed in Mexico owes much to earlier paintings of the Woman of the Sun/Virgin of the Apocalypse. 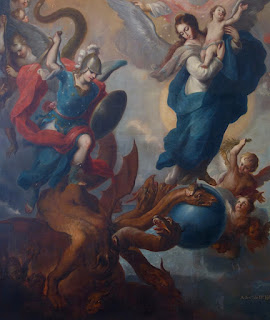 Here is another version, by Miguel Cabrera, c. 1760. You can see from a painting like this that the wealthier centers in Latin America, like Mexico City, developed painters who worked in a strongly European style and were just as good at it as Europeans. Working out from there you encounter work that is less and less like the polished European Baroque and more like folk art; but there is not a sharp break, just a wide gradation. 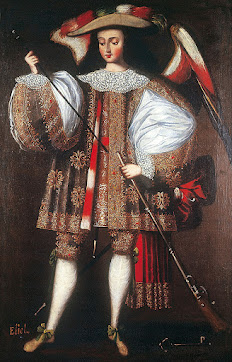 Here is another angel from the Cuzco School of colonial Peru. This is one kind of painting that is very much alive, and there are still painters in Peru who identify as part of the Cuzco School. Or at least whose dealers use the term in selling to Americans. 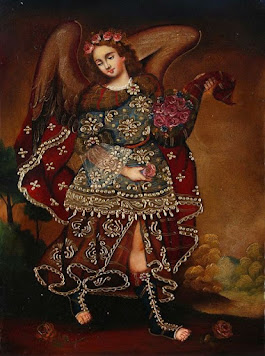 And another. What I like about these is the cultural blending, the Mestizo-ness I wrote about in a book review recently. There is a vast discourse about these paintings that focuses on to what extent they represent Native artists adopting European themes and styles and to what extent they represent some kind of defiance or appropriation. You can certainly see a strong strain of "God is ours as much as yours" in many works. I find them fascinating, another way people have taken a tradition passed on to them and made it their own. 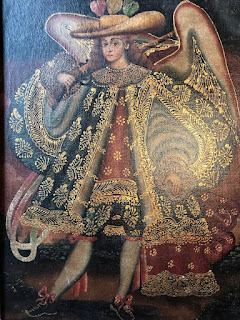 The iconography in this images is fascinating: the strange half-shoes on the first and second-to-last ones; the repeated firearms; the long loops or tapes on the right-hand sides (from the depicted figure's point of view) of the second, fourth, and last ones (is it significant that these are also three out of the four matchlock-bearers?).

As you say, the whole tradition shows clear European influence, and yet much of it is new, local, and original.

Everybody just thinks the ones with guns are cool, so there are lots of pictures online; there used to be a Tumblr called "Angels with Arquebuses."

I don't know about the loops. Mary and I were just trying to find out, and we did find a suggestion that they might be symbols of the Passion, but we were not connvinced.