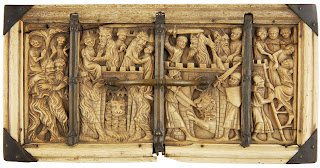 Fascinating scene carved on a 14th-century French ivory box, showing – well, what, exactly? There are castle walls, knights, ladies, wild men, and a lion. But what are they doing? What story is this? 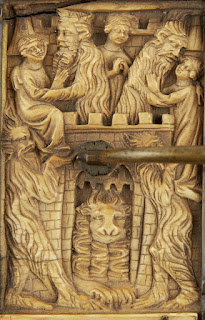 The left and center left scenes seem to depict wild men attacking the castle and carrying off ladies. But the ladies don't seem to be resisting, and the wild men are not being particularly violent. 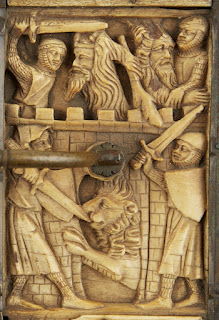 But then in the center right panel the knights appear with swords, attacking a wild man and a lion.

And in the far right scene seems to show a knight helping a lady down a ladder, as if escaping from the wild men. Which I suppose would mean that the knights are losing? 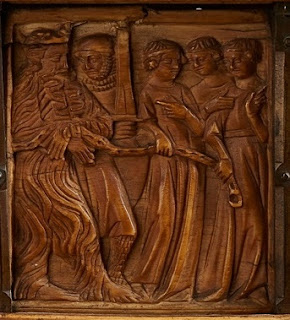 But on the front is this scene showing ladies leading a defeated wild man in chains. The British Reviewing Committee on the Export of Works of Art and Objects of Cultural Interest –RCEWAOCI, for short – which just barred the export of this object, says this:

The casket is one of just nine known 14th century French composite caskets that depict scenes from mediaeval romance tales. It includes a detailed and early depiction of wild men, mythical creatures appearing in mediaeval European art and literature that symbolise people living outside ‘civilised’ society. The casket shows them assaulting a castle in a rare variation on the popular theme of the storming of the Castle of Love.

"Casket" here meaning "box," but I guess it sounds fancier. But The History Blog disagrees with this interpretation, and rightly so. 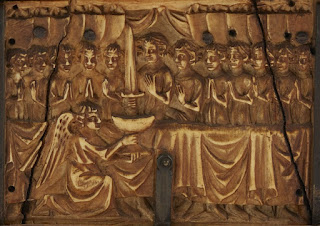 A clue is provided by an end panel that clearly shows Arthur's knights with the Grail. Which definitely does not belong in a scene of the Castle of Love. Instead the carving might show an attack by Arthur's knights on the Grail castle, sometimes called Corbenic, an event that appears in some of the later French romances.

But that doesn't fit perfectly, either, since the wild men also seem to be attacking the castle. I would go a step further, because both the attack on Corbenic and the siege of the Castle of Love were frequent subjects for masques held at the French royal court and other elite venues. I suspect that this either depicts such a performance, or else was influenced by them, which is why the wild men are carrying off the ladies with such courtly gentilesse. There aren't any lions in stories of either the Castle of Love or Corbenic, but such creatures often appeared in masques, played by two or four men, which allowed many opportunities for clowning. (As in a famous scene in Wolf Hall.) More humor could come from the ladies choosing whether to be rescued by knights or carried off by wild men.

As I have written here many times, you know a tradition is alive when people mess with it, changing it in little ways with each telling. In the courtly world of 14th-century France all noble people knew Arthurian lore as well as we know vampire stories, creating opportunities for all sorts of variations, especially humorous ones.

Half the reason I became a medievalist was so I could use words like "casket" instead of "box."

But if you say "casket" to most people they assume somebody was buried in it.

(Be sure to roll the r sound in "corrrrected.")